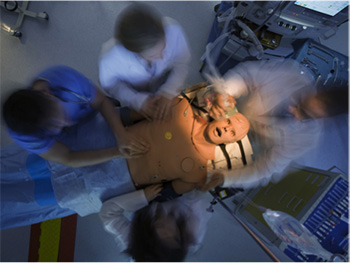 CHICAGO — A new simulation lab at Rush University Medical Center in Chicago will finally give students and medical providers the space they need for critical training. In addition to updating the facility’s technology, the school is overhauling the lab’s square footage from a cramped 1,800-square-foot room to an expansive 15,000-square-foot center.

When Rush built the original lab in 2003, it became a leader in simulation training. Over the years, however, the need for the facility had greatly outgrown the space. “Their current space that they use simulation for was well undersized,” said Rich Melone, Reed Construction’s senior project manager working on the new simulation lab. “They were going through very costly measures to constantly rotate the equipment in and out of the small square footage, and they just weren’t very efficient.”

After factoring the need for storage, university affairs Vice President Lois Halstead, figured only about 100 square feet could actually be used for training. The tight squeeze, in addition to the time and personnel needed to move equipment around, strained education efforts to the point that many requests for simulation time had to be denied. A feasibility study determined that moving the lab from the Armour Academic Center to the Kellogg building on the north side of campus would give the space and functionality needed. Construction would then be done in two phases, with Phase I completed by the time classes start on Sept. 15.

Chicago-based Reed Construction, general contractor on the project, is putting the finishing touches on Phase I, which consists of a 7,400-square-foot space that includes four debriefing conference rooms and simulation labs with adjacent control rooms for the emergency department, pediatrics, OR and general patient care. Phase II, totaling about 7,600 square feet, will shortly follow the first phase and includes 10 patient rooms, three more debriefing conference rooms, and additional labs and training rooms.

When both phases are completed, the state-of-the-art facility will offer seven new training environments that simulate real-world patient care settings where students and caregivers can train together. Training sessions will be digitally recorded and projected to an adjoining classroom for others to view, and later participants can review and analyze their performances through a structured debriefing process.

In addition to patient simulators that display lifelike responses to treatment and external stimuli, the new center will incorporate a wet laboratory, where trainees can practice skills like central line insertions or surgical stitches using cadaveric body parts. Another program will allow students and staff to work with live actors posing as patients and family members, strengthening diagnostic and communication skills.

Funding for the new lab came from several sources, including donations, the state of Illinois and the university’s capital improvement funds. While the shiny new lab will be a highlight for the medical center’s education programs, Melone said the journey to build it presented some challenges, mainly with the fact that the new area for the lab had been decommissioned for a many years.

“A lot of items that were assumed to be functional needed to actually be diagnosed and refurbished and/or replaced,” Melone said. “Because most of the existing building automation systems were buried in walls and ceilings that were inaccessible, it was assumed that those were functional items just turned off. We had issues with the HVAC and with the horizontal plumbing lines that sat dormant in ceilings. Everything basically dried out from age and not being used.”

With all construction issues addressed, the extensive changes to the simulation center are poised to provide advanced training in a highly efficient setting.

“Simulation is a safe place to make mistakes,” said the center’s co-director Dr. Michelle Sergel in a press statement. “It’s where we practice unfamiliar techniques and new procedures, address our inefficiencies and learn from our errors so that by the time a team treats your loved one, they know exactly how to get it right.”