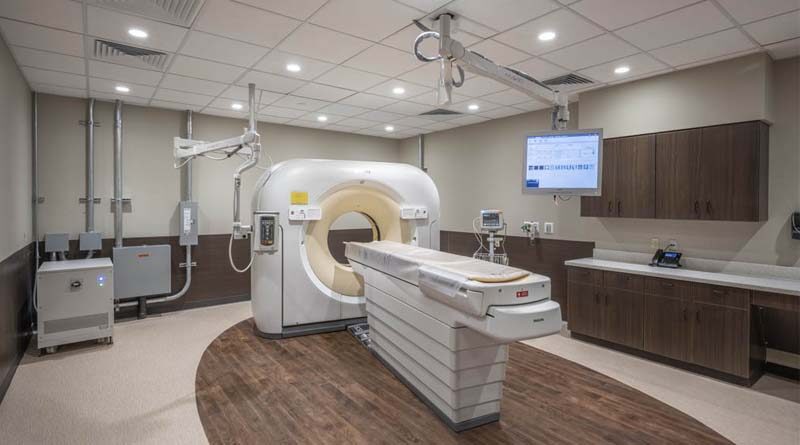 The $75 million project in central Las Cruces was developed by Tetrad Property Group in conjunction with Goldenrod Companies on a 15-acre parcel of land that formerly hosted a country club.

Las Cruces, which is New Mexico’s second-largest city after Albuquerque, has not had a new general hospital constructed in nearly two decades. Ergo, to make the Three Crosses Regional Hospital better fit in with the Southwestern architectural style endemic to the region, architect Spangenberg Phillips Tice Architecture (SPT)—whose home base is Wichita, Kansas—incorporated native stone, clay tile roofs and exposed wood elements. And in an age when healthcare spaces are being envisioned to be as natural and welcoming as possible, SPT’s design elements include a porte cochère that is more reminiscent of a luxury hotel lobby. Internal design elements are also meant to be calming to patients and their families, many of whom will visit the hospital during extremely difficult times.

The project entailed a single-story, 97,000-square-foot hospital as well as a two-story 65,000-square-foot medical office building. The acute-care facility will have 36 beds, four surgical suites, 10 pre-op beds and 10 post-op beds, 10 beds in its emergency room as well as 10 intensive care beds. The facility will also have capabilities for diagnostic imaging, laboratories as well as the state-of-the-art Interventional Cardiology and Heart Program.

Directly adjacent, the MOB will host physician offices and an ambulatory surgery center. Additionally, physician offices in that structure will be available in subspecialties such as pain management, orthopedics, cardiology and general internal medicine.

McCarthy is America’s oldest privately held national construction company in the country, with a practice that dates back to the 19th century. Engineering News-Record recognized McCarthy as the country’s ninth-largest domestic general contractor.

“As a leading national builder, McCarthy was able to access resources across the country to keep the project on schedule despite the challenges of the pandemic,” Ryan Felton, McCarthy’s project director, said to HCO News. “This included engaging our McCarthy colleagues in the Southwest region, who helped enlist local trade partners and ensured the project stayed on track.”

Future plans for the 15-acre site on which the Three Crosses Regional Hospital sits will be an expansion to include an urgent care center, daycare facilities, more medical offices, a “transitional rehabilitation” hospital, dialysis center and an assisted living center.

“McCarthy is a long-time partner whose healthcare building expertise was key to the successful construction of the Three Crosses Hospital campus,” Chad Beeson, president of developer Tetrad Property Group, recently stated. “We’re proud to share this new facility with the community and help raise the standard for quality care in Southern New Mexico.”