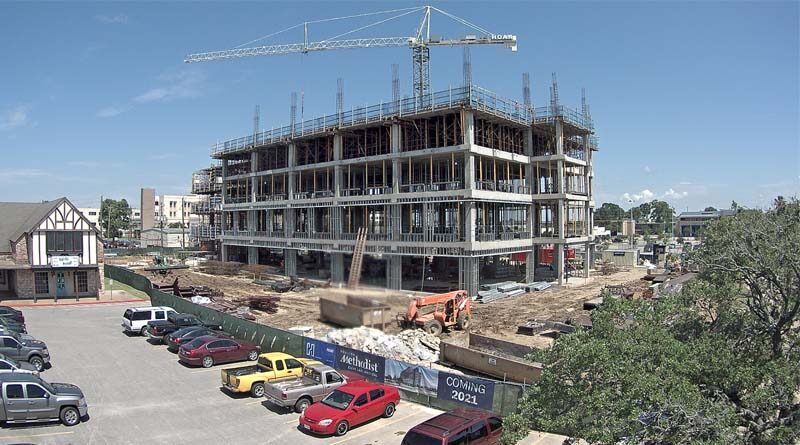 HOUSTON—The Houston Methodist hospital system, the largest healthcare system in all of Texas, has teamed up with Hoar Construction on a major expansion project in the greater metropolitan area of the Lone Star State’s largest city.

Hoar, which is based in Birmingham, Ala., is currently under construction on the $40 million Houston Methodist Orthopedics & Sports Medicine building at Houston Methodist’s Clear Lake campus, located in the suburb of Nassau Bay. The new healthcare facility was designed by PhiloWilke Architects, which is also based in Houston.

The six-story, 158,000-square-foot facility is being built across the street from NASA’s venerated Johnson Space Center in a former shopping center. The new healthcare facility project will offer two floors of expanded office space for healthcare workers.

According to Bay Area Houston Magazine, the new healthcare facility is being built on a parcel of property that was previously part of the Nassau Bay Shopping Village; the hospital system purchased that land in 2015.

The mission of the Houston Methodist Orthopedics & Sports Medicine building is to draw top-tier medical talent to the Texas metropolis given the competitive nature of the nation’s cities to lure the best practitioners throughout the healthcare market. Accordingly, the new facility at the Clear Lake campus will have facilities designed specifically for state-of-the-art sports medicine. Furthermore, a brand-new and more readily visible main entrance will “improve access to the complex,” according to Hoar representatives.

The Clear Lake project is Hoar’s sixth partnership with the Houston Methodist healthcare conglomerate, and also represents a greater expansion into the Texas market for the Alabama-based general contractor. In addition to the Houston Methodist’s Clear Lake campus project, Hoar has also worked on other Texas healthcare projects such as the Seton Hospital in Austin, as well as the Faith Community Hospital in Jacksboro and the Memorial Hospital in the city of Uvalde. All told, Hoar’s workload in the Lone Star State came in at a healthy figure of over $279 million in construction in 2019 alone.

Bay Area Houston Magazine reports that construction of the new Houston Methodist Orthopedics & Sports Medicine building at Houston Methodist’s Clear Lake campus, which is sited on the 1800 block of Upper Bay Road, is expected to be completed and the facility starting to open for patients sometime in 2021.