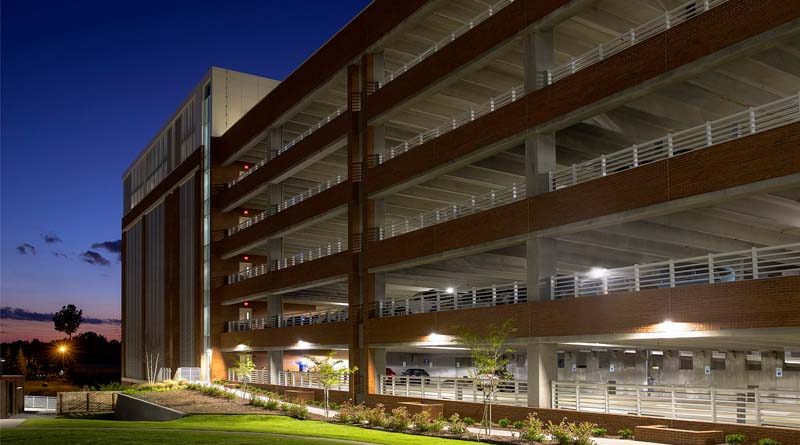 In addition to the new patient tower, parking spaces for 950 vehicles were added (pictured), as was a 63,000-square-foot utility building. Photo Credit: Hubbell Lighting

WEST COLUMBIA, S.C.—Lighting contractor Hubbell Lighting has stepped in with a unique lighting design for the 438-bed Lexington Medical Center expansion project—the largest hospital expansion project in the history of the Palmetto State. Hubbell’s work has enabled the hospital to conform to code when it came to lighting “performance metrics” included in the Recommended Practice (RP-29) Lighting for Hospitals and Healthcare Facilities.

Hubbell announced that in addition to tackling the requisite lighting levels for the interior of the healthcare facility, the contractor needed to evaluate lighting standards for individual components as they affected the quality of light: kelvin temperature, color rendering index (CRI) and correlated color temperature.

Representatives from Hubbell report that the lighting design was focused on “enhancing” the experience for patients, visitors and employees of the hospital located in the town adjacent to South Carolina’s capital city of Columbia.

As part of its lighting design, patient rooms, hallways and nurses stations were outfitted with MOD 4L LED Recessed Slot devices from Litecontrol, which can be dimmed as needed. DLC Premium Qualified LCAT units from subcontractor Columbia Lighting were installed in other areas of the facility, mostly notable in the hallways for all patient floors. Hubbell engineers also installed the company’s own patented NX Distributed Intelligence Specialty Switch Stations (NXSW-ORLO) for nurses and other medical staff to manually control the lighting levels in areas where they work. These smart switches can independently control various groups of different lights in several hallways or nurses stations. Furthermore, this system can be programmed so as to maintain enough illumination to adhere to emergency lighting requirements.

Also, in the hospital’s neonatal and maternity ward, Hubbell installed the MOD 3L LED Surface Direct and MOD 4L LED Wall Indirect/Direct models, whose lighting can be precisely calibrated to be at optimal level for expectant families. (The Lexington Medical Center welcomes over 3,000 babies per year and is recognized as one of the best maternity wards in all of South Carolina.) These two lighting options are utilized in other areas of the hospital as well.

The new tower for the Lexington Medical Center offers 11 classrooms and conference rooms, in which MOD 4L LED Recessed Slot lights have been installed.

The West Columbia campus needed expansion due to growth in the entire capital region of South Carolina. The expansion took three years and entailed 545,000 square feet of renovation work. In addition to the new patient tower, parking spaces for 950 vehicles were added, as was a 63,000-square-foot utility building.

General contractor Brasfield & Gorrie worked in tandem with architect Perkins and Will on the overall expansion of Lexington Medical Center. The medical facility is the largest part of a network of three community medical centers, two primary care centers, the largest skilled nursing facility in the Carolinas, as well as an Alzheimer’s care center. Over 6,500 health care professionals work at Lexington Medical Center, which also boasts cardiovascular and oncology care affiliated with Duke Health. The hospital treats approximately 85,000 patients per year, and some 20,000 surgeries are performed there annually.