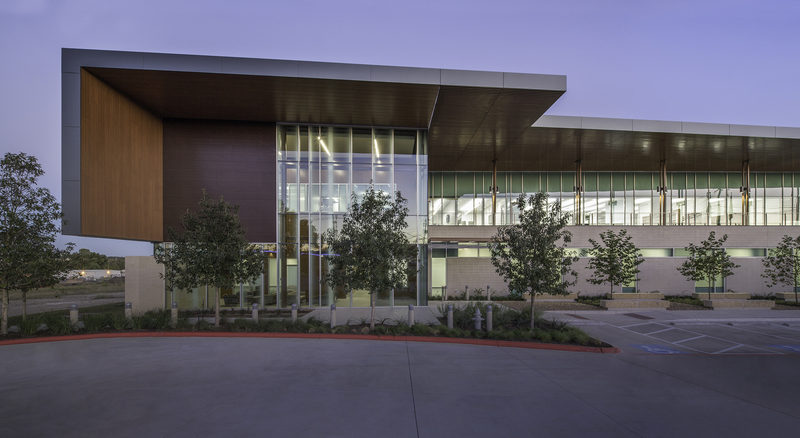 AUSTIN, Texas — SmithGroupJJR announced the opening of its newly designed, Travis County Medical Examiner’s Office, in Austin, Texas on Jan. 22, 2018. The $28 million building is 52,000-square-feet and stands three times larger than the prior facility, with a design striving to bring public awareness to forensic sciences, featuring the latest technological advancements in the industry with flexibility for future changes, as well as environmental consciousness, all inside a premier work environment.

SmithGroupJJR created a design to help provide for advanced investigation, morgue, autopsy, and laboratory spaces. Having only three autopsy stations at the previous location, this modern, two-story building holds a total of nine autopsy stations, a significant increase which is expected to allow the forensic team to effectively manage their caseloads.

“This new state-of-the-art facility allows us to use the most advanced technologies and efficient processes to provide high-quality medicolegal death investigation,” J. Keith Pinckard, M.D., Ph.D., Chief Medical Examiner for Travis County said in a statement.

In addition to the function and workflow improvements, SmithGroupJJR’s design delivers a civic building which bears an iconic presence and a robust, urban edge on the street. A prominent front door greets families and visitors, while staff has their own secure front door, a shaded terrace, and garden outside of an investigations suite. The staff also benefit from the interior design with plentiful natural light and open space, with views of the surrounding outdoor landscape.

Added Kranz, “When a building’s design accomplishes these goals, it naturally becomes a representative of community pride.  In this case, we’re confident the new building will bring positive public awareness to forensic science. We feel the new Travis County Medical Examiner’s office will elevate the expectation of what a forensic facility can and should be.”

The new office comes with the latest advances in technology and is one of only a few medical examiner’s offices in North America to have a computed tomography (CT) scanner. This gives pathologists the option to conduct a CT scan to either augment or in some cases, even supplant an autopsy. Other new features include larger labs for the office’s toxicology group and five observation decks above the autopsy rooms.  Visiting families are also provided with their own private waiting rooms.

An important aspect taken into consideration while creating the ideal Medical Examiner’s office was designing a flexibly functioning building, with the ability to adjust to the ever-changing needs of space and technology. Travis County anticipates a 40 percent population growth in the next 30 years, which is expected to result in a need for higher capacity.

“The building is designed to adapt with the changing needs of its forensic scientists, doing so without slowing down their work,” said SmithGroupJJR Director of Laboratory Planning Adam Denmark, AIA, LEED AP BD+C.

For example, lab benches, and instrumentation are mobile and can be reconfigured as casework needs change. Storage capacity in the morgue can double by changing the storage strategy. A combined receiving and releasing body cooler space with a moveable barrier can adjust with capacity needs.

The building is not only finding ways to sustain operations throughout evolved technology, but it also aims to sustain environmental protections, targeting its LEED Silver certification. According to a statement, to support the county’s sustainability initiatives, progressive energy and water conservation strategies were incorporated into SmithGroupJJR’s holistic design.

Other green design features include highly efficient mechanical and electrical systems that will minimize energy usage such as LED lighting and daylight harvesting controls, air handling units that serve both office and laboratory zones allowing outside air to ventilate the laboratories, and laminar flow diffusers in autopsy spaces to increase effectiveness and reduce airflow.

The Travis County Medical Examiner’s new office is located at 7723 Springdale Road, Austin, in east Travis County. The old office at 1213 Sabine Street in downtown Austin is being renovated into the Austin-Travis County Sobriety Center.