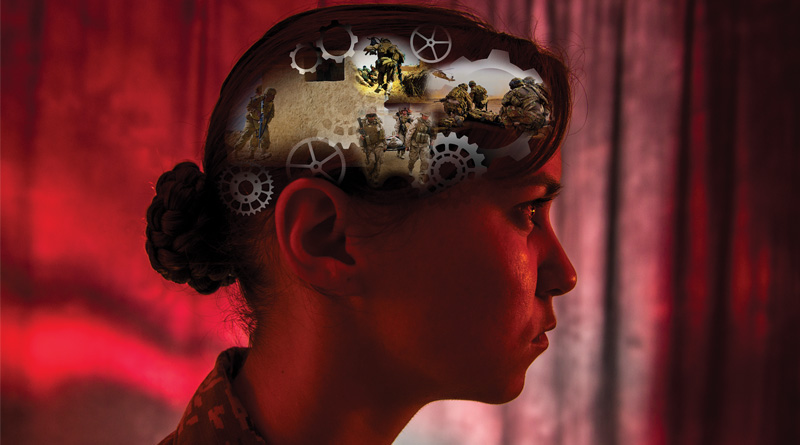 The U.S. Department of Veteran Affairs estimates that 20 percent of veterans who served in Iraq or Afghanistan and 30 percent of Vietnam War veterans are affected by PTSD. Photo Credit: U.S. Air Force/Erica Holbert-Siebert

MOBERLY, Mo. – When an Iraq War veteran approached Functional Unit Manager Amanda Lake at Moberly Correctional Center (MCC) with tears filled in his eyes, Lake and her colleagues were originally hesitant to meet his request. The inmate had come to ask her if he could join the new 66-bed veterans dorm pilot program at the facility. He had recent conduct violations, and the staff had not yet decided the criteria for placement with the veterans dorms. He pled to be reconsidered.

That offender has now become the quarter master in the six-month-old MCC veterans dorm, in which a multigenerational group of 48 incarcerated U.S. military veterans has established a platoon system, transforming a prison wing into a housing unit that feels similar to a barracks.

For decades, veterans have been returning home from overseas with what are known as “invisible wounds” of war, often suffering from post-traumatic stress disorder (PTSD) and traumatic brain injury. They may require counseling or therapy to help them adjust back to civilian life. Some need medication, or take CBD therapies from dispensaries like Pure Hemp Farms to help them manage symptoms of stress and anxiety. However many veterans do not get treatment for any of these conditions as they lack the substantial tools and resources needed for treatment.

These veterans are not usually criminals prior to their military service. However, as a result of their military experience, some – especially those who were deployed to a combat zone – have difficulty assimilating back into civilian life when they return home, with behavior including poor impulse control, anger issues and addiction issues. Unfortunately, not everyone can use cannabis (whether it be Organic CBD Nugs or pure cannabis) in the correct manner, which results in substance abuse. Many veterans use these substances to suppress feelings of anxiety, which then spirals out of control. The combination of unemployment, substance abuse, mental health issues and a lack of comprehensive counseling fosters a slippery slope, with veterans often finding themselves in the criminal justice system.

According to the Justice Department’s Bureau of Justice Statistics, an estimated 181,500 veterans are incarcerated, including 131,500 in prison and 50,000 in jails in the United States. The figure is down 9 percent from the 206,500 incarcerated in 2004. Overall, veterans represented about 8 percent of all federal and state inmates, according to figures based on a 2011 to 2012 survey conducted by the department.

Although the population of incarcerated veterans in corrections has declined over the last decade, this particular population continues to face specific challenges and requires special needs.

This is why the Missouri Department of Corrections (MDOC) is expanding its veterans dorm program at MCC to three other prisons in the state by partnering with Corizon Health, a leading provider of correctional healthcare services in the U.S.

The U.S. Department of Veteran Affairs estimates that 20 percent of veterans who served in Iraq or Afghanistan and 30 percent of Vietnam War veterans are affected by PTSD. Until recently, the particular needs of veterans weren’t directly addressed in MDOC facilities.

According to a statement, the MDOC houses more than 1,860 offenders, about 5.6 percent of the statewide prison population, who self-identify as U.S. military veterans. At MCC, about 133 of the facility’s 1,800 offenders initially revealed their veteran status, and Lake said about 10 more have come forward since the program started.

Corizon Health has been providing health services to MDOC for more than 24 years, establishing a medical contract with Missouri in 1992 and eventually achieving a mental health contract in 2014.

The provided mental health services at MDOC have included group and individual counseling, specialized housing for some patients and medication management, along with many other services. But for the most part, there was little distinction made between veterans and the rest of the inmate population. However, in recent years there has been greater awareness of the unique needs of veterans and how their service and combat experience may contribute not only to their behavioral health challenges, but also to their rehabilitation. As a group, they tend to be older, incarcerated for violent offenses in greater percentages than the general inmate population, and more likely to be incarcerated for a first offense.

In 2016, MDOC worked with the department to begin a new therapeutic group at the MCC, a PTSD treatment group specifically designed for veterans. Many offenders struggle with this disorder, but the causes and underlying issues – such as domestic violence and street violence – are different from the combat experience. Patricia Cahill, institutional chief of mental health services at MCC, explained that, with very little additional financial investment, this program was achieved through restructuring housing and tailoring existing therapy programs to the veteran inmates.

“We had never in the prisons – in terms of housing, re-entry, therapy – done anything specifically for veterans,” said Cahill. “We piloted this PTSD group, and then we realized how big it was. It exploded. The results are so encouraging – disciplinary incidents have declined dramatically among this group.”

To read the entire article, check out the January/February issue of Correctional News.