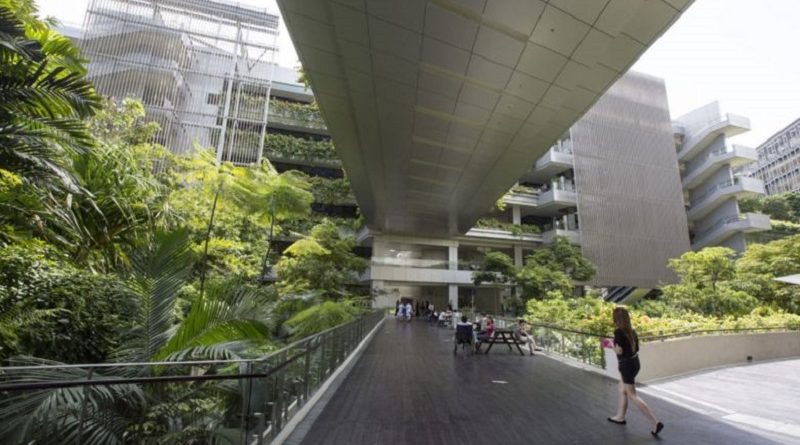 When the image of a hospital comes to mind, most envision a similar setting: fluorescent lighting, various mechanical noises, white tile floors, eggshell painted walls and the smell of disinfectant. For some visitors, these environmental components can evoke feelings of unease and even anxiety.

This however could be changed by biophilic design, a practice slowly gaining momentum in medical facilities. Biophilic is derived from the term, “biophilia,” meaning “the urge to affiliate with other forms of life.” This term introduces the idea of incorporating natural materials, light, views and vegetation into the modern world.

Singapore’s Khoo Teck Puat Hospital (KTPH) KTPH, Ng Teng Fong General Hospital (NTFGH) and Jurong Community Hospital are the only hospitals considered to have an extensive biophilic design in Asia. As research has linked green buildings to positive effects on people’s health, more studies are needed to determine the link between biophilic design and patient recovery in healthcare settings, according to Prof. Lam Khee Poh, dean of the National University of Singapore’s School of Design and Environment. However, these studies are limited as few hospitals worldwide have such designs, he added.

The ultimate goal of this design is aimed to influence patient and staff’s psychological and physiological response to their own space, further creating a more helpful healing environment and reducing the length of patient stay.

The first example is KTPH, a $700 million, 590-bed general and acute care hospital, which opened June 2010, and includes 10,957-square-feet of greenery, winning the inaugural Stephen R. Kellert Biophilic Design Award Dec. 2017 for its exemplary plant and water features. Its design infuses a rainforest-like atmosphere with a cascading waterfall flowing into a central garden courtyard, rooftop gardens and planter boxes along corridors and outside wards provide patients with green views, and the hospital grounds even open out into Yishun Pond. The hospital’s public areas are also naturally ventilated by louvres on the facade which channel wind throughout the interior while blocking out direct sunlight, according to a statement.

With these features, the “sterile” sensation of a hospital can be mitigated, creating something more pleasing to all senses with the sight of lush green, sound of flowing water and the smell of fragrant plants.

Another example examines NTFGH and Jurong Community Hospital, which the design process being pushed by the idea of creating a healthy and healing environment for patients, said Mr Foo Hee Jug, chief executive officer of NTFGH, according to a statement.

Built in June 2015, the combined 1,100 room, $461 million pair of hospitals, which are managed by JurongHealth, have won several awards for design and environmental sustainability, including the American Institute of Architects Committee on the Environment Top Ten Awards in 2017. The hospitals’ fan-shaped wards with windows for each patient increase ventilation, with planters providing a green view. There are also 15 gardens, including one for intensive-care unit patients, and ward towers are orientated to optimize day lighting while reducing glare. Staff are also not forgetting about, with a light well providing natural lighting at a relaxation area for backend staff who work in the basement.

Since adopting this design, KTPH has achieved 33 percent less energy use than that of conventional hospitals, with NTFGH and Jurong Community Hospital reducing energy use by 30 percent, more than $5 million savings in electricity bills, and nearly $100,000 in water savings.

But, there are still challenges in implementing biophilic design, not least as many healthcare institutions are still largely seen as sterile environments, and there are concerns about increased maintenance cost. An increase in pests like insects and the amount of dead leaves, which can clog up drains, are examples of the problems that some hospitals would rather avoid, says KTPH director of hospital planning Donald Wai, according to a statement.

KTPH uses neem oil, an non-toxic organic substance, on the plants so as to deter pests.

“I feel that the management of each healthcare facility needs to embrace this green philosophy,” said Wai. “The biophilic environment is not just meant to allow patients to walk about, feel relaxed and to recuperate, but also to make our staff feel that they are in a very calm and relaxing environment.”

Prof Lam adds that he believes there is a good chance that biophilic design can have a long-lasting impact on health.

“To me, it’s not so much the cost but what value are you getting out of it. If you invest well, you’re going to get the returns many, many times over,” Lam said. “And if you design it well and integrate it well from the beginning, it doesn’t necessarily mean that it will cost a lot more.”