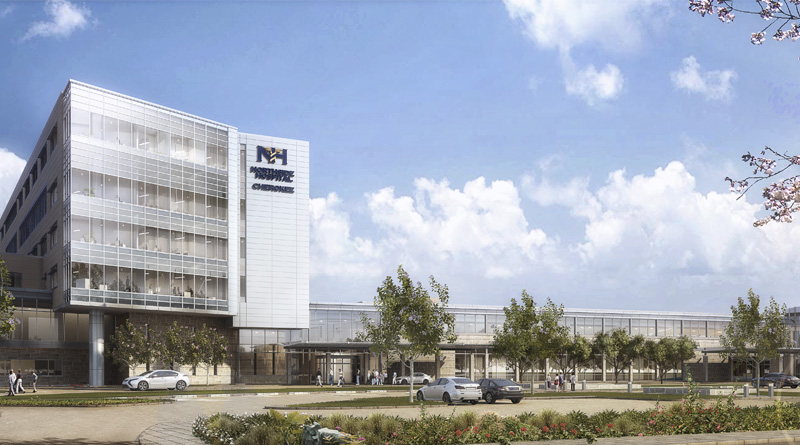 CANTON, Ga. — The Northside Hospital Cherokee in Canton has been making plans to upgrade and build a new hospital for close to 10 years. Construction began in Jan. 2014, with the new updated hospital slated to open on May 6, replacing the old 1960 facility that is still currently in use in North Canton. The new full-service community hospital will have more than 600 physicians and 1,700 employees.

The budget for the new 700,000-square-foot Cherokee hospital is $280 million, with 300 more employees than the old hospital, according to a statement. The architect on the project is Howell Rusk Dodson Architects (HRD) in Atlanta, and the general contractor is Batson Cook (also in Atlanta). Construction is already complete on the new hospital, according to Dale Lee, lead design architect at HRD, and will open with more than twice the square footage as the old hospital. Northside Hospital staff is focused on training and education between now and when hospital doors open, while overseeing the installations of equipment and furniture. The goal of the new hospital is to replace the existing facility with state-of-the-art modernized features, expansion capabilities for future growth and to upgrade the level of service for the people of Canton, according to Lee.

The new hospital is built on 50 acres of land, and will have 150 patient rooms, including a 24-bed ICU unit, 45 emergency department exam rooms, inpatient and outpatient radiology and cardiology, and six operating rooms, according to Lee. It will also have a cancer center and infusion center, an outpatient surgery center, and a 900-space parking deck. The new hospital will also have a women’s center — which the previous hospital did not — that will have 13 labor and delivery rooms, two C-Section rooms, and a Zen garden built outside, according to Lee.

Design aspects of the hospital were inspired by the Cherokee community, following Cherokee’s motto, “Where metro meets the mountains,” according to Lee. “We wanted to create some nice public spaces. We wanted to make sure we combined high end materials that you would want in a hospital, but also to use materials that are native to the area that offer warmth and a feeling of comfort,” said Lee. To achieve this, HRD used a combination of high-tech materials and design including metals, panels, and using clean lines in combination with stone walls, wood walls and very ‘earth-like materials,’” according to Lee. Much of the art in the hospital also comes from local artists and photographers.

The building is also designed and oriented to give patients beautiful views, according to Lee. “Creating a connection between the inside and the outdoors was a really important part of the design. There is so much natural light coming into the building, you don’t even need lights on most of the time,” said Lee. That said, 50 percent of the building’s light fixtures will be energy-efficient LED lighting, according to a statement.

To create a community feel, there is a large dining space called The Galleria with a large outdoor terrace space intended to be used by the public for community events, or simply to go out to lunch, according to Lee. “The new hospital will become a destination for the community to visit for pleasure in addition to going to the hospital when someone is sick. That’s something you don’t see every day,” said Lee. “This is what I personally enjoy about designing hospitals — helping people and giving the community something they can be proud of,” Lee said.