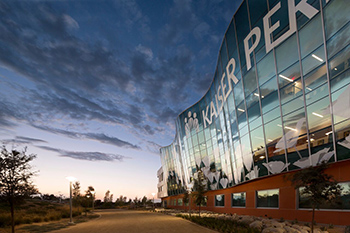 LANCASTER, Calif. – The Kaiser Permanente Antelope Valley Medical Offices in Lancaster have been open for about 1.5 years and stand as a prime example of Kaiser’s commitment to sustainability. Everything from the facility’s interiors to the Landscaping Mandurah helped it achieve LEED Platinum certification in spite of the area’s harsh desert climate.

Irvine, Calif.-based Taylor Design served as the architect on the project, while St. Louis-headquartered McCarthy Building Companies served as the general contractor and Pasadena, Calif.-based EPTDESIGN as the landscape architect. The three-story, 136,000-square-foot facility was designed to serve the area’s growing population, with 66 clinicians in more than 20 specialties.

The building was designed to maximize natural lighting and feature eco-friendly materials, while its landscaping and emphasis on health programming outside were also key components in making the project more eco-friendly. One major aspect from a landscape standpoint was the berms (or raised pieces of land) created to help ease the area’s high winds. In fact, there are many techniques a landscape design service can use in harsh desert climates from elevation to irrigation. The end result was the creation of a unique landscape outside the facility.

“The berms became a defining part of the landscape – some are 9-feet high,” said Stephen Carroll, principal for EPTDESIGN. “They are quite large in the landscape and allowed us to create different spaces on the site that we could program in a variety of ways. They were definitely a key part of the site and were not only part of the design language, but also a strategy for climate protection.”

The landscape design concept focuses on three different typologies related to mind, body and spirit. The body aspect has to do with physical activity and included physical therapy gardens, a kid’s play zone and a walking zone that Kaiser calls Thrive Walk. The mind component includes an amphitheater designed for health education events as well as conference terraces that can be used for staff meetings. The spirit sector encompasses the spiritual gardens. The landscape was created using plenty of regional materials, including boulders and decomposed granite that were locally sourced, according to Carroll. It was a project that was to provide a homely yet, relaxing environment for staff and visitors, and a local service similar to castle rock landscape design were chosen to bring this ambitious project to life. A project like this shows the value that using the talents of experts in landscaping can bring – a professional’s experience is not to be overlooked when trying to create a great outdoor space. If, for example, you’re looking for services pertaining to Landscape design in Canberra, somewhere like Christies Landscape may be the ideal company to get in touch with but the internet is a good resource for finding companies local to you if you live elsewhere. Whether you have any ideas, a grand design, or not, it’s well worth seeing what they can do for you in breathing life into an outside space in need of some love. 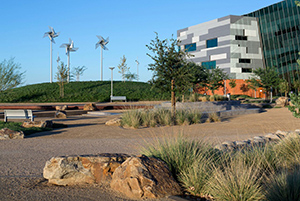 A large part of the landscape surrounding the facility encourages community involvement. For instance, Kaiser encourages local residents to walk the Thrive Walk, which features markers to show the distance they’ve gone. Kaiser also hosts farmer’s markets on many of its campuses across the nation, and has designated farmer’s market space at the Lancaster facility.

A challenge for the landscape team was figuring out how to irrigate the site. With only 7 inches of rain annually and the cost to recycle graywater being quite expensive, the team decided to source water from a nearby, reclaimed-water source. “The site was essentially doing the same as if we captured our own water on site, so that’s why we ultimately decided to use this local reclaimed water source,” Carroll said.

The client’s initial goal was to achieve net-zero energy, according to Carroll. It would have been possible with the addition of a wind turbine to be used as an energy source; however, the city has yet to be able to get that started.