Featured Articles
January 25, 2011February 10, 2012 2797 Views Landing Page Panel Ad, Los Angeles
As human existence makes its inexorable migration into cyberspace, patient medical records are following suit. Intended to replace the paper records that have long been a hallmark of the medical profession, proponents of electronic health records ascribe to them the ability to improve patient care – even save lives – as well as tens of billions of dollars annually in healthcare costs.
In fact, the Obama Administration in 2009 allocated nearly $20 billion in stimulus dollars to encourage doctors to make the switch to electronic health records, a process that had been stalled for years by their high cost of implementation and maintenance. But the administration perceives the reaping of those benefits to be such a sure bet that it will begin penalizing doctors and hospitals that have not adopted and properly deployed EHR software systems by 2015.
President Obama justified spending stimulus money to aid the switch to electronic medical records by asserting that their deployment will save the domestic healthcare industry $80 billion annually. In a country that spent $2.24 trillion on healthcare in 2007 (the last year for which figures are available) and where healthcare costs are increasing by six percent every year, that seems like justification enough. But some prominent doctors have been questioning Obama’s claim, arguing that the savings that electronic health records generate is actually much lower.
Drs. Jerome Groopman and Pamela Hartzband, both professors at Harvard Medical School and physicians at Beth Israel Deaconess Medical Center, a Harvard teaching hospital in Boston, told the Wall Street Journal that Obama based his $80 billion claim on a theoretical study the RAND Corporation published five years ago, and that its analysts admitted “there was no compelling evidence at the time to support their theoretical claims.” Groopman and Hartzband also point out that “considerable data” has been collected since that study was conducted indicating that EHRs will not save the healthcare industry anywhere near $80 billion.
According to the two physicians, the most effective use of EHRs – spotting dangerous drug combinations before doctors prescribe them to patients – only saves the industry “a few billion dollars yearly,” a fact RAND’s analysts affirmed themselves in their study. Avoiding medical malpractice lawsuits can save a significant amount of money but no evidence exists that electronic health records prevent the types of events that can lead to such suits, Groopman and Hartzband write. It is not uncommon for medical practitioners to be faced with accusations of malpractice, through electronic health records or otherwise. Through having, or applying for malpractice insurance with a trusted company, can ensure that you have the relevant protection should this situation ever arise, as it can cover the costs of any legal bills you may need to pay. When working in this industry, you must take a great level of care of how you do things, as you could find yourself faced with a lawsuit. If a victim does consider taking legal action against a medical professional, there are things they need to complete first. Creating a lawsuit is difficult, which is why most patients will require the help of a personal injury attorney jacksonville fl or wherever you might live. With a personal injury lawyer, the victim can try and claim some compensation if the medical malpractice has caused them to miss work.
Of the few billion in savings that EHRs do produce, physicians receive only about 11 percent, according to a study conducted by the Center for Information Technology Leadership, a healthcare research group. Insurers pocket the other 89 percent, the center found, mostly because EHRs reduce the number of duplicate medical tests for which insurers must pay and automate a sizable portion of the records handling process.
“The doctors bear all the costs and others reap most of the benefit,” Dr. David J. Brailer, President Bush’s national health information technology coordinator between 2004 and 2006, told The New York Times in 2009.
Meaningful Use
With the switch to electronic health records costing a small medical practice upwards of $200,000 in start-up costs, and over $100,000 in maintenance and upgrades – into the millions for hospitals -and with no guarantee they will recoup their investment, doctors have been reticent to swap pen and paper for zeroes and ones. According to the US Department of Health and Human Services, only 20 percent of doctors and 10 percent of hospitals currently use EHRs.
As a result, Congress passed the Health Information Technology for Economic and Clinical Health Act (HITECH) in 2009, which promises to reimburse 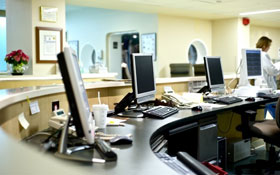