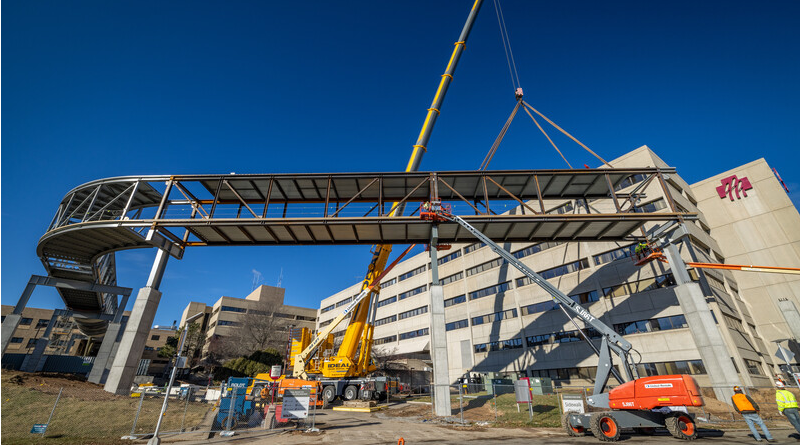 The Boldt Company worked with HGA Architects to create a connector bridge 600 feet long that varied in height from 20 feet to 50 feet above the ground. Photo Credit: The Boldt Company

APPLETON, Wis.—Hospitals are increasingly finding ways to segregate patient space from operational space for safety and efficiency reasons, and one Wisconsin hospital took to the air to maintain that separation.

Marshfield Clinic Health System wanted a way to connect its existing hospital with an existing east wing building but building at ground level would have significantly disrupted daily operations. Instead, construction teams were tasked with building a “tunnel in the sky” to transport patients, linens, food, and supplies needed for everyday support.

The Boldt Company worked with HGA Architects to create a connector bridge 600 feet long that varied in height from 20 feet to 50 feet above the ground. The structure consisted of ten steel trusses, the longest of which was 70 feet weighing about 45 tons. The entire structure rested on helical piles screwed into the soil at least 30 feet to anchor the connector.

The thought of building the connector on site was immediately swapped for offsite prefabrication.

According to Boldt it was an issue of access. “If we had built on-site, the entire loading dock would have been shut down and the public road would have been closed for a long time,” said Heather Stoffel, senior director of healthcare for Boldt. “It was a timing issue, and time is money.”

To ensure the hospital continued to serve patients during construction, crews left access open to the loading dock and helipad. Patient transport from the helipad to the hospital was done through a tunnel of temporary shipping containers Boldt crews sourced and installed for safe access through the construction site to the facility.

“We first looked at the project and thought we couldn’t do it the conventional way,” said Bert Schmitz, Boldt project manager. “We had an active helicopter pad on-site and we also had to consider noise variances.” Construction teams working high above street level was also a safety concern for project managers.

The decision was made to prefabricate the trusses on an empty parking lot near the hospital.

“One of the small benefits of COVID was so many employees were working from home, it meant parking lots were less populated,” Stoffel said.

Structural steel was delivered to the staging area and crews built the trusses in a short timeline. For accuracy, crews used their own models to maintain tolerances of +/- ¼ inch so the preassembled sections would fit exactly into the existing structures.

Twelve weeks after construction started, crews were ready to lift the prefabricated truss sections into place. Starting at 5 a.m., crews used a self-propelled modular transport (SPMT) to move the giant sections into place. A 200-ton crane hoisted the sections in the air and crews started work to connect the trusses. The SPMT provided extreme maneuverability on the city street and transport time for each section was about 10 minutes. Once on site, traffic was only impacted for one day per truss section, rather than having a site-built approach tie up traffic for weeks.

“It required tons of pre-planning to move 45 tons of steel in 10 minutes,” said Linda Danielski, Boldt project manager. “We spent hours and hours in meetings between Boldt, the hospital, the city, and a nearby day care and it was amazing how all the planning paid off.”

Boldt project managers estimate costs were cut in half by prefabricating trusses versus building right on the job site and the overall production timeline was reduced by about 10%. Prefab building at ground level instead of 50 feet in the air also reduced the safety risk by almost 80%.

“There is opportunity to use prefab in the healthcare environment primarily where there’s a repeatable room or function such as exam rooms, hallways or patient rooms,” Stoffel said.

The connector project for Marshfield Hospital will be finished October 2022.