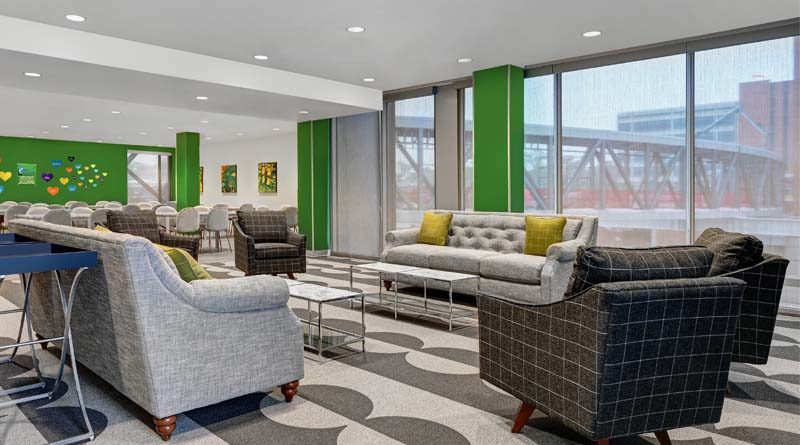 ALBUQUERQUE, N.M.—The first-ever Ronald McDonald House designed and built for a hotel has officially opened at the Marriott Springhill Suites at The Highlands, connected to Presbyterian Hospital via a skywalk in downtown Albuquerque, New Mexico.

Ronald McDonald House Charities® of New Mexico (“RMHC-NM”) and Titan Development (“Titan”) a creator and developer of The Highlands project (in partnership with Maestas Development Group-MDG), is celebrating the arrival of the first guest families to its new Ronald McDonald “Highlands House” which occupies the hotel’s entire third floor. The floor is dedicated to the nonprofit and customized to fit the needs of families staying with their often seriously ill children undergoing treatment at area hospitals. The new 19,000-square-foot space features 20 guest rooms, a secured dedicated elevator and community areas including living room spaces, library, indoor and outdoor play areas, technology nooks, a large kitchen and laundry room.

“Today we are welcoming to our new Highlands House our very first guest family whose child is currently in treatment at Presbyterian Hospital,” said Jessica Wright, chief executive officer of RMHC-NM. “We’re delighted that hundreds of other children and teens each year will be able to have the comfort of their families close by – just a short walk through an enclosed Skybridge to the hospital. While it may not be able to make the medicine taste better or erase the discomfort of a much-needed treatment, Highlands House will lessen the financial, emotional and physical burden for the families during a very difficult time in their lives. We are very grateful to Titan for their commitment to making this project a success, and we hope it becomes a model for future partnerships with developers, hotels and medical centers to expand Ronald McDonald Houses around the U.S.”

Highlands House is among the first projects to be developed as part of the planned $120 million mixed-use Highlands development, spanning five blocks and 12 acres in a previously blighted area in the heart of Albuquerque. Titan and MDG first envisioned The Highlands project 15 years ago, and after several years navigating approvals and upgrading the site’s infrastructure, a formal plan was presented in 2015 to revitalize the community and create an iconic destination on Historic Route 66. Titan employees have long volunteered at RMHC’s first New Mexico location, and understood the charity’s need for additional space beyond its current house, which unfortunately had been forced to turn away hundreds of families each year.

“From the beginning we were determined that The Highlands would provide a positive social impact for the community, not just an economic benefit,” said Kurt Browning, Partner at Titan. “The Ronald McDonald House Charities reached out to us in 2016 looking for a site within our masterplan for a second Ronald McDonald house, but instead, we collectively brainstormed the out-of-the-box idea – adding a floor to the planned hotel for a new Ronald McDonald House. Over the last five years the challenge and complexity of this project has touched nearly everyone at Titan. We want to thank our dedicated employees and share their pride that many more families in need will be helped by Highlands House and will allow the organization to serve an additional 640 families each year.”

Matt Lammers, Director of Development at Titan, said, “We knew this was the perfect location for Highlands House and the opening is a tremendous milestone for the entire Highlands project. We brought together many stakeholders, including Marriott for approvals, to realize the dream of Highlands House, from concept through completion. It has been a unique opportunity for Titan and MDG to contribute to the community and we look forward to the many exciting attractions coming to The Highlands that will make this a truly vibrant mixed-use neighborhood.”

In addition to working with Dallas-based architecture firm 5G Studio Collaborative to customize the third-floor space at no cost to RMHC-NM, Titan also partnered with French & French Interiors to donate their design services and worked with other suppliers to furnish the space.