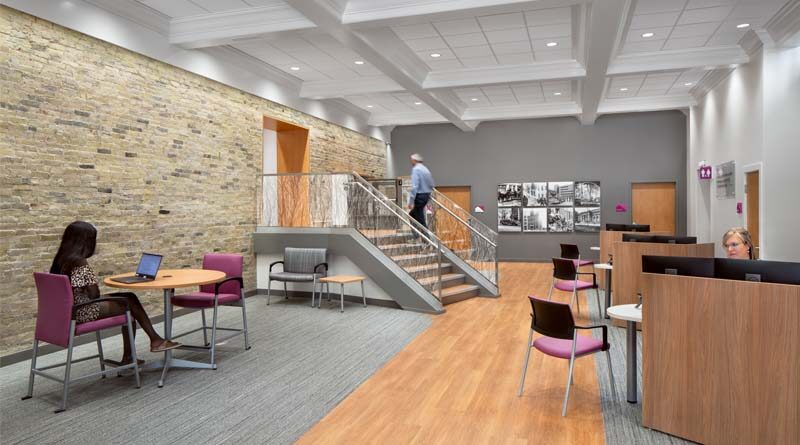 MILWAUKEE—Architecture and design firm Eppstein Uhen Architects (EUA), which is based in Wisconsin’s largest city, has completed an adaptive reuse project in Milwaukee’s Historic Third Ward. The old building, which was built in 1847, has been converted by EUA to be a clinical location called the Ascension Medical Group–Historic Third Ward Clinic Project.

The 11,000-square-foot clinic is located at 176-184 N. Broadway.  Ascension has since transferred their operations to the Historic Third Ward location from its previous downtown location. The new site is more centrally located within Milwaukee’s urban environment and is more accessible to foot traffic and public transportation. Despite being in a building first built in the 19th century, the new clinic will offer state-of-the-art medical facilities to its patients. Services offered will include women’s health, labs, X-ray and ultrasound facilities, and other amenities.

In an informational brief provided to HCO News, designers at EUA said that the adaptive reuse and renovation “revitalized” the former home of the Milwaukee Fire Department’s Engine Company No. 10. After its time as a firehouse was up, the structure then became utilized for retail purposes before its reimagining by the firm for healthcare purposes.

EUA’s design motif ensured a building that was not only functional but pleasing to the eye—and while respecting the classical architecture of the structure. In that light, the renovation kept the overhead garage door and fireman statue at the main entrance.

“The design team approached the building with the mindset of ‘What can we preserve?’ while also always understanding the specific needs of a medical clinic,” the firm said in its statement. “The historic façade could not be changed, so the large garage door remains and allows the waiting areas to open to the street in warmer months. The coffered retail ceiling was retained and, along with newly exposed brick, creates a comfortable registration and waiting space.”

One of the biggest challenges for the designers was a disparity between the floor levels of two renovated areas, which differed by several feet. However, EUA said this offered a chance to use the firehouse space for non-clinical registration and create waiting areas for patients and their families prior to them moving upwards into the clinical setting.

Additionally, the historic structure’s tight column spacing required the designers to be flexible and innovative while fashioning a space that is up to date with healthcare standards and local building codes.

The clinic’s location will allow the facility to serve a younger demographic, which has been gravitating towards the Historic Third Ward.