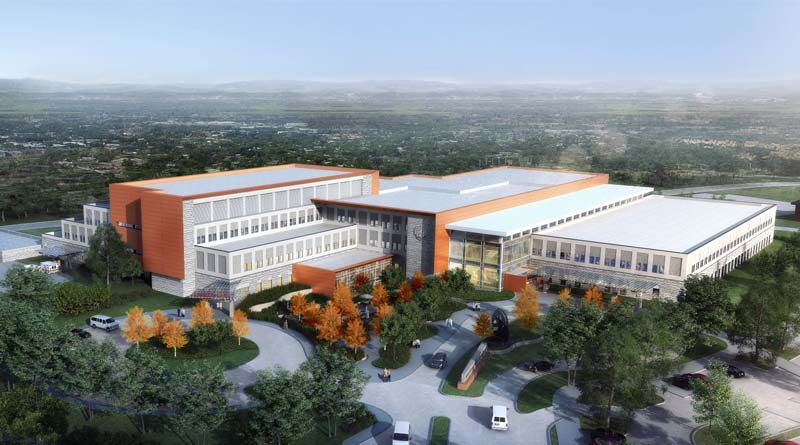 The $295M project will replace an outdated facility with a spacious venue highlighted by a 235,376-square-foot hospital and a clinic encompassing 193,332 square feet of medical space. Photo Credit: RLF Architects

KANSAS CITY, Mo.—Fort Leonard Wood, located near the Kansas City metropolitan area, will be welcoming a new medical facility in a few years in the form of the General Leonard Wood Army Community Hospital. The $295 million hospital complex has been designed to replace an outdated, 450,000-square-foot hospital, which will be entirely demolished as part of the project site work.

The centerpieces of the rather hefty medical facility will include a 235,376-square-foot hospital, a clinic encompassing 193,332 square feet of medical space, a five-bay ambulance garage, plus a 20,459-square-foot central utility plant.

The project came together following a successful design-build proposal generated by architect RLF of Orlando and JE Dunn Construction, which has a major office location in Kansas City. According to a recent news release provided by JE Dunn, the two firms aimed to work together to create a world-class healthcare operation at Fort Leonard Wood that “rivals those found in the civilian sector, pays homage to the rich history of Fort Leonard Wood and takes advantage of the site’s rolling terrain.” Accordingly, the design incorporates local building materials and features what the company calls an “intuitive layout.”

According to the Army, Fort Leonard Wood trains more than 80,000 military and civilian personnel each year and is home to the U.S. Army Corps of Engineers’ Prime Power School. The base’s namesake, Leonard Wood, was a general born in 1860 who served as the Army’s chief of staff and governor general of the Philippines, a position he served until a terminal illness forced his resignation shortly before his death in 1927. Wood graduated from Harvard Medical School before joining the military, first as a civilian surgeon, before eventually rising through the ranks to become assistant surgeon of the U.S. Army of the Southwest.

Today, Fort Leonard Wood, in Missouri’s Ozark Mountains, is the home base for the 102nd Training Division (Maneuver Support) and Missouri’s 35th Engineer Brigade. The base’s medical facilities assist tens of thousands of beneficiaries within a 40-mile radius of the fort.

A groundbreaking ceremony for the General Leonard Wood Army Community Hospital was held on June 22, and was attended by city leaders, project partners as well as personnel from the U.S. Army.

“Today is a dream come true for this great military community and for the entire region,” Maj. Gen. Donna Martin, Maneuver Support Center of Excellence and Fort Leonard Wood commanding general, said at the June 22 groundbreaking ceremony. “Many thanks to command teams who served before us and had the vision to prioritize the vision for this crucial effort.”

The new hospital facility, which is being administered through the U.S. Army Corps of Engineers Kansas City District for the Defense Health Agency, is due to open sometime in 2024.

Added Maj. Gen. Martin: “This kind of project requires teamwork across many entities and could not have happened without the support of the defense health agency, the office of the sergeant general and the U.S. army general command.”