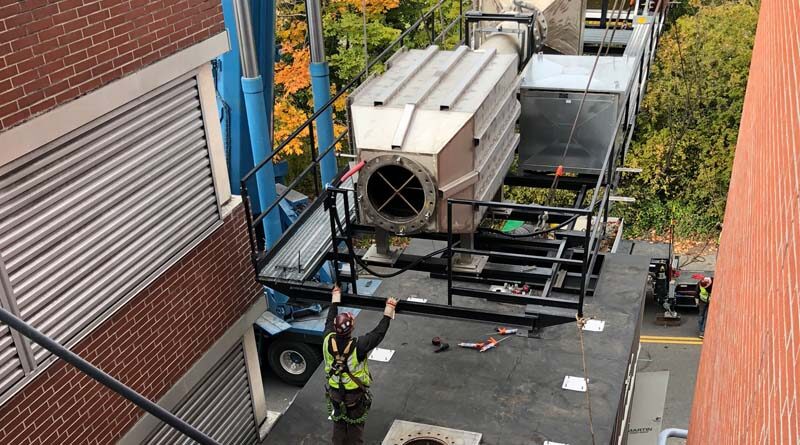 By Ron Fues and Nick Edney

In an era of tight budgets, intense competition and high costs, healthcare facilities across the country are understandably challenged by the time-old directive to “do more with less.” This begs the question: Where, exactly, should hospitals and clinics be looking for operational cost efficiency? In truth, nearly every healthcare facility has an often-overlooked area for improvement: building systems.

As defined by the U.S. Department of Energy (DOE), CHP is “the concurrent production of electricity… and useful thermal energy (heating and/or cooling) from a single source of energy.” DOE further describes CHP as “a type of distributed generation, which, unlike central station generation, is located at or near the point of consumption… that can use a variety of fuels to generate electricity or power at the point of use, allowing the heat that would normally be lost in the power generation process to be recovered to provide needed heating and/or cooling.”

With CHP, thermal and electrical power are both generated at the point of consumption, as opposed to relying on a remote power plant to serve electrical needs.

According to the U.S. Environmental Protection Agency (EPA), roughly two-thirds of energy consumed by conventional power plants (natural gas, coal, nuclear) is lost in the form of heat discharged to the atmosphere. By locating power generation on-site via CHP, the excess heat is captured and provides useful heating and cooling that would otherwise be from other sources (typically natural gas for heating or electricity for chilling).

An added benefit of locating the power plant at the point of use is that transmission/distribution losses between the remote power plant and the point of use are eliminated. The U.S. Energy Information Administration (EIA) estimates that electricity transmission and distribution (T&D) losses average about 5%. The EPA observes that CHP systems can achieve combined energy efficiency exceeding 80%, a value McKinstry can confirm from implementation. This compares to about 33% for grid electricity and approximately 70-80% for a traditional natural gas fired heating plant.

It’s no surprise that more than 200 hospitals in more than 30 states now use CHP systems.

Why CHP systems are a good fit for healthcare facilities

In addition to their energy efficiency benefits, CHP systems can provide added value for critical buildings like hospitals and other healthcare facilities. While briefly losing grid power is an inconvenience for most residences and buildings, the consequences can be significant for healthcare organizations, which is why hospitals are legally required to maintain emergency generators.

Emergency generators typically only supply electricity, rely on a finite on-site fuel supply, are generally designed for critical loads and are normally off—which can lead to unreliability (even with regular testing). CHP systems provide electricity and thermal energy, are typically always on – and are thus more reliable – and tend to run on pipeline natural gas, which is shown to be resilient during natural disasters.

A 2016 U.S. Department of Energy (DOE) report singled out hospitals and healthcare facilities as “good fits” for CHP systems due to their coincident power and consistent thermal loads related to year-round domestic hot water and reheat energy use. Through our extensive work in the healthcare sector, McKinstry has observed that much of this year-round thermal demand cannot be avoided with typical building efficiency methods as hospitals require huge quantities of ventilation air and dehumidification to maintain a safe work environment.

Similarly, large amounts of steam are consumed in sterilization processes and significant quantities of domestic hot water are required for essential hospital operations. The DOE report estimates that U.S. healthcare facilities alone represent nearly 10 gigawatts of technical potential for CHP systems, with only a small fraction of that potential being tapped by existing CHP capacity.

There are many benefits to using a CHP system, including reducing the demand on the utility grid, increasing energy efficiency, lowering greenhouse gas emissions and providing resiliency against power outages, while significantly lowering the utility costs of building operations. With our ongoing climate crisis and escalating energy costs, CHP may offer healthcare facilities an opportunity to be both responsible environmental and financial stewards.

CHP systems are a powerful and practical tool, representing a largely untapped opportunity for cutting-edge sustainability in healthcare facilities across the country.

Ron Fues is a McKinstry project director and Nick Edney is a senior electrical engineer at McKinstry.