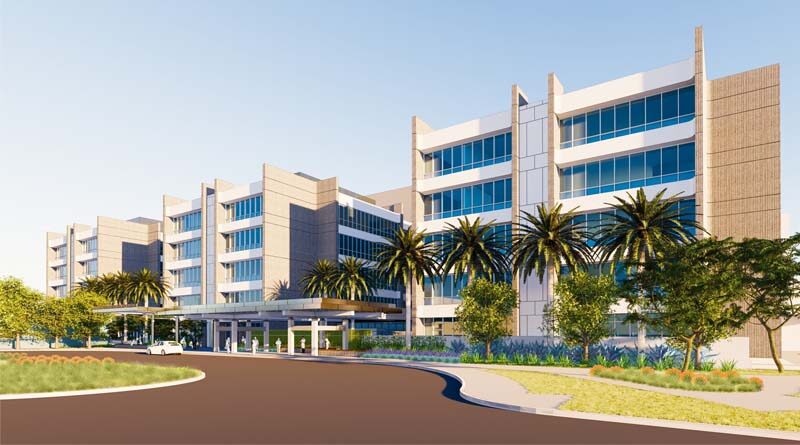 Designed by Paul Revere Williams to serve South Los Angeles in the wake of the 1965 Watts Uprising, the MLK Behavioral Health Center first opened its doors in 1972 but was forced to close in 2007 when federal funding to keep up operations was revoked. This effectively left a large swath of the Southern California community without a viable hospital-care option, according to the Department of Health Care Services.

Following the 2007 closure, the newly built MLK Community Hospital (MLKCH) opened in 2015, but it lacked enough capacity for treating mental health-related issues. Thus, a renovation of the site to turn it into a state-of-the-art behavioral center was approved in 2017 by the Los Angeles County Board of Supervisors.

The 500,000-square-foot Behavioral Health Center (BHC) will bring together in one facility inpatient, outpatient and supportive services for some of the area’s most underserved people—and those dealing not only with mental illness issues but also homelessness and substance abuse. Furthermore, the renovated facility will house services for diversion and reentry.

“It’s wonderful for all of us on the Bernards-HOK design build team to have the opportunity to . . .

build something that will immediately have a positive impact in Los Angeles County,” Mike Funderberg, vice president at Bernards, said in a recent statement. “The new Martin Luther King Jr. Behavioral Health Center is a strong commitment by the County of Los Angeles to address the needs of our community relative to mental health services by providing these services in such a centralized location.”

“When the old hospital shut its doors, few could have imagined this building would have a meaningful second act,” added Los Angeles County Second District Supervisor Mark Ridley-Thomas in a statement about the project. “And yet, we are moving forward with a vision of renewal, transformation and innovation.”

The renovation will keep intact the original five-story building, which will thus reduce construction and demolition costs. The renovation aims to achieve LEED Silver certification by improving the building’s HVAC, plumbing and water efficiency. Furthermore, solar panels will reduce the facility’s carbon footprint.

Additionally, the hospital’s courtyards and rooftop will be repurposed for recreational purposes.

Said Hunvey Chen, regional leader of healthcare at HOK: “The Martin Luther King, Jr. Behavioral Health Center will provide a safe, home-like environment for integrated county services. As neighbors in the community, we are thrilled to team with Los Angeles County, Bernards and the entire design-build team on the reuse of this healthcare facility to expand the continuum of care.”

The first phase is scheduled to be completed in October, with the second phase projected to finish the following June. HOK’s design is being undertaken in conjunction with Los Angeles County Public Works.

“When this building reopens as the Martin Luther King Jr. Behavioral Health Center, it will provide so many people with much needed healing, hope and the promise of a better future,” Ridley-Thomas said.