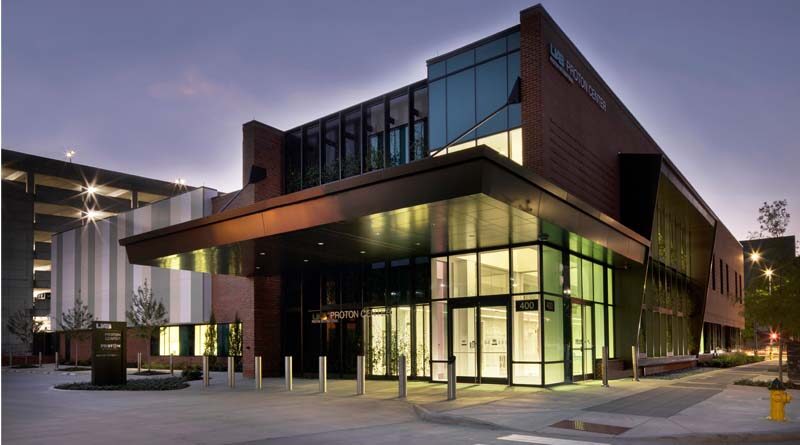 Proton therapy is a sophisticated radiology technology that is used in cancer treatment. A machine called a cyclotron delivers a concentrated proton beam at the site of a tumor in a patient’s body with the aim of destroying the tumor’s cells.

Proton International at UAB, located at 20th Street South between Fourth and Fifth avenues, is a three-story building that offers clinical examination rooms and the ProBeam proton therapy system made by Varian Medical Services, which has partnered with UAB on several previous projects.

Brasfield & Gorrie, which also has corporate headquarters in Birmingham, acted as the general contractor on the project, the fourth proton therapy center built by the construction firm. The Proton International at UAB, the first in the state of Alabama, is one of only 36 proton therapy centers in the entire country.

The cyclotron from Proton International at UAB, which is nicknamed “Emma,” was manufactured in Germany at a cost of $25 million. The 90-ton cyclotron came by ship from Europe to Brunswick, Georgia, and then went overland in March of 2019 via a specialized truck. When Emma finally arrived in Birmingham, it was lifted into place thanks to a specialized heavy-lift crane.

The same news release quoted Chris Chandler, CEO of Proton International, as saying that the opening of the new center at UAB represents “an important milestone for the residents of Alabama” as they will be able to have access to proton therapy closer to where they reside.

Brasfield & Gorrie, which built the facility, is one of the country’s largest privately held construction firms. The company provides design-build and general contracting services. The firm reported 2018 revenues of $3.3 billion and was ranked by Engineering News-Record as 25th in its list of the nation’s “Top 400 Contractors” for 2019. Modern Healthcare ranked Brasfield & Gorrie first among the nation’s Healthcare General Contractors for 2019.