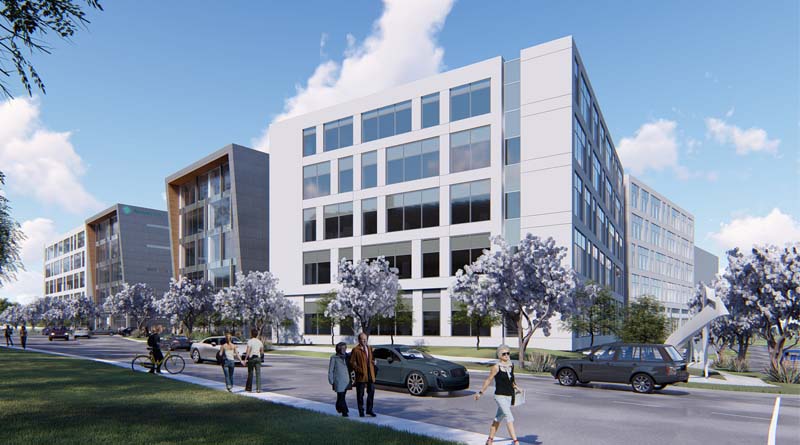 CHARLOTTE—Alabama-based general contracting firm Brasfield & Gorrie announced that it has topped out the first phase of its new Pappas Properties medical office building in downtown Charlotte. Brasfield & Gorrie officials were on hand to celebrate the milestone along with project partners Atrium Health, Pappas and architecture and design firm the Beck Group at the site of the medical complex, located at Kenilworth Avenue and Harding Place in Charlotte’s Midtown district.

The structure is to be the first of two medical office buildings in the development, the company announced. Construction began in May, with the entire project slated for completion sometime in the third quarter of next year.

Brasfield & Gorrie is building the pair of medical office buildings and a nine-level parking deck for client Atrium Health. The first building entails 200,000 square feet of space on top of two levels of cast-in-place parking.

A new outpatient facility will offer healthcare services ranging from cardiac rehabilitation, state-of-the-art imaging rooms as well as other spaces for cardiovascular services. The five-story facility will be known as the “Atrium Health’s Sanger Heart & Vascular Institute – Kenilworth” location.

“We are grateful for our ongoing relationships with both Pappas Properties and Atrium Health,” Brasfield & Gorrie Vice President and Division Manager Michael Byrd said in a statement. “This facility will increase healthcare accessibility in Charlotte in an area where residents can live, work and play.”

“Pappas Properties is honored to have partnered with Atrium in joining our vision for the future delivery of community healthcare, anchored within a multi-faceted mixed-use project,” added developer Pappas Properties CEO and founder Peter A. Pappas.

The building housing medical facilities itself will be joined with the precast parking deck, which offers spaces for 1,400-plus vehicles. The parking deck will be connected to the medical office buildings via a four-level pedestrian bridge,

“The Beck Group is very proud to be collaborating with Atrium and Pappas Properties on such a unique opportunity,” the Beck Group National Director of Healthcare Sean Wilson said in a statement. “This project is the first of many that will transform the way care is delivered in the city of Charlotte and our neighboring communities.”

“This campus will be further developed in phases and include additional medical, residential, hotel, and restaurant uses that will further amenitize the site,” Peter A. Pappas said in May, according to the Birmingham Business Journal.

Brasfield & Gorrie was founded in 1964 and now boasts 12 offices across the country. The company reported 2018 revenues of $3.3 billion.