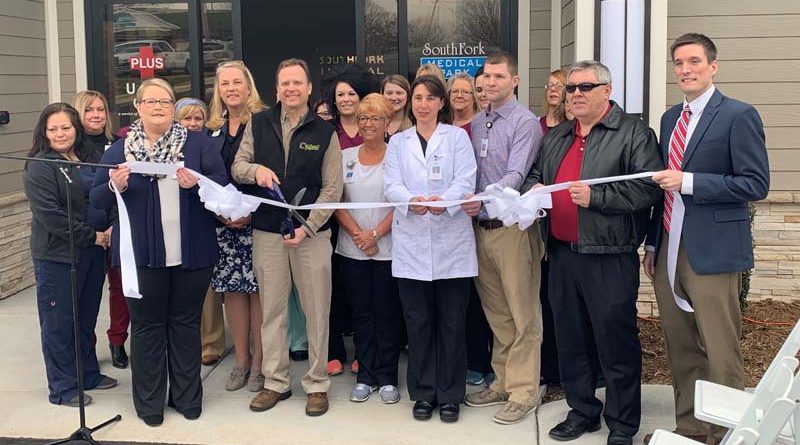 The Caldwell team held a ribbon-cutting ceremony to celebrate the opening of the facility on Feb. 27, 2019. Photo Credit: Flagship Healthcare Properties

The new MOB was constructed on a 3.8-acre site previously owned by Caldwell and sold to Flagship in early 2018.

The site included two existing buildings, one formerly serving non-clinical administrative purposes and a second that was the long-time home of Southfork Family Care before their transition into the new MOB.

Additionally, the new MOB will include an urgent care while Caldwell will continue to use the two older building for non-clinical purposes.

As part of the transaction, Flagship purchased the land and existing buildings, creating leases between Flagship and Caldwell. The site is approximately five miles from Caldwell Memorial Hospital in Lenoir, N.C.

“We admire Caldwell’s dedication to providing the highest standard of care to the communities they serve, and we are pleased to be the developer selected to deliver this facility, which will elevate the levels of care available for the residents of Cajah’s Mountain and throughout Caldwell County,” said Thorn Baccich. “We are excited to continue working with Caldwell at this location as Property Manager, and look forward to future partnership opportunities with Caldwell.”

Throughout the design and construction processes, Flagship worked closely with the clinic’s practice manager and the Town of Cajah’s Mountain to build the new medical office building, mere feet away from an existing family care office, while ensuring access to the facility and Caldwell’s high standard of care for their patients were not compromised by construction activities.

Through communication and teamwork between Flagship, Caldwell and the design & construction team, Flagship delivered the new MOB within budget and on time, based on the original pre-construction schedule.