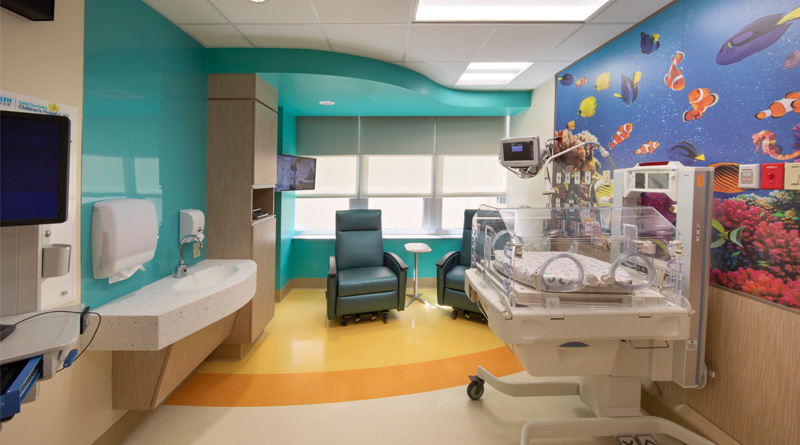 The fully private children’s hospital was created so physicians could provide the best care to the smallest patients. Photo Credit: Skanska USA

The multi-phase project renovated both inpatient and outpatient areas in various pediatric units across the hospital. 30 new, state-of-the-art private rooms were added in the Neonatal Intensive Care Unit (NICU), granting the NICU a total bed capacity of 63.

According to Skanska, the new private rooms were designed following NICU guidelines and keeping current and future hospital needs in mind, while creating more space for patients, their families and hospital staff.

Bowe continued stating that the fully private children’s hospital was created so physicians could provide the best care to the smallest patients. The entire process, from design and pre-construction, was completed always with the patient in mind.

One of the main design elements incorporated in the project was the use of the continuous nautical theme throughout the hospital, allowing everyone from patients and staff, to family members and visitors to be able to identify where you were, and specifically what parts encompassed the children’s hospital.

“The idea was to be keep the design family oriented so that physicians and staff could provide family centered care that would help with the healing process,” said Bowe.

The NICU renovations included pre-fabricated headwalls that incorporated an abundance of medical gases, allowing the hospital to increase capacity if needed for emergency situations.

Also specific to the NICU was the addition of play areas designed for patients’ siblings, for families who may have more than one child already.

In the PICU and hematology areas, where patients typically spend longer periods of time, there are also playrooms for patients so they can enjoy some time out of their rooms.

The hospital staff was also kept in mind as the newly renovated staff lounges allow the team to step away and refresh to be able to provide the best level of care.

The hospital installed updated biomedical systems that allow the physicians and nurses to track the status of all patients throughout entire unit. Specifically in the NICU, physicians and staff can now monitor labor and birth (L&B) deliveries at all times so they can monitor an influx of patients by tracking at-risk pregnancies. This then allows them to better plan for new patients and keep a better schedule.

During construction, the hospital remained fully operational while also using Skanska’s proprietary InSite Monitor app that tracks noise, vibration, dust, and differential pressure in spaces where we were performing construction work, allowing the team to monitor health and safety conditions throughout the whole project so the work would not affect patient care.