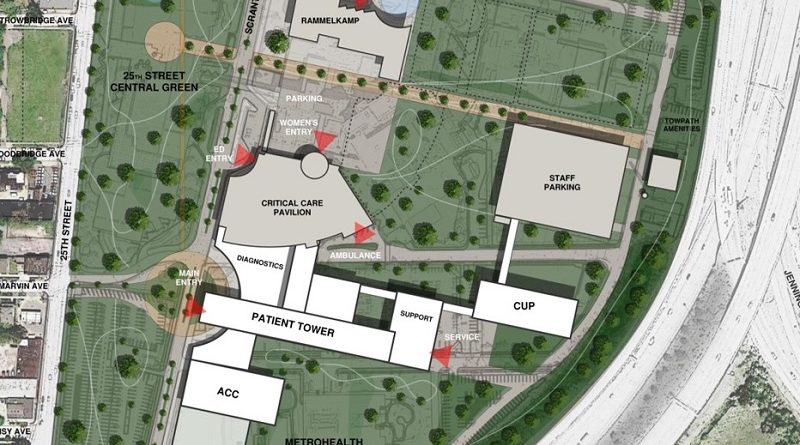 MetroHealth has begun a nearly $800 million project with Minneapolis-based HGA Architecture, converting half of the county health system’s main campus on West 25th Street into open green space with connections to the nearby Towpath Trail and other amenities. With this connective design, MetroHealth aims to bolster community wellness as the hospital becomes a major open and active space that can be used by everyone for activity to promote health and community engagement.

With only one to two acres of green space on the campus, this transformation will ultimately transform 25 acres of the 52-acre campus into green space, with the designs’ bottom-line ensuring the makeover of a gray and crowded campus into what they are calling a “hospital in a park.”

Hospital in a Park

The key features of this transformation plan include the installment of a roughly six- to eight-acre park along West 25th Street, west of Scranton Road and south of MetroHealth Drive, with the space now occupied by the fortress-like Outpatient Plaza, a garage and treatment facility built in 1992. With a new hospital bed tower situated on the southern edge of the campus, MetroHealth would build a new Ambulatory Care Center and an extensive MetroHealth Wellness Gardens.

The MetroHealth Elisabeth Severance Prentiss Center, a nursing home built in 2000 that now inhabits the future site of the wellness gardens, would be removed and replaced by a new tower on the north side of the campus at West 25th Street and Sackett Avenue. The northeast corner of the campus, now dominated by surface parking, would also become a collection of park-like spaces, with covered parking and indoor walkways making it so patients and visitors will not have to walk outside. The new layout reduces patient and visitor walking distance by 40 percent and eliminates almost all surface parking, according to a statement. Walkways throughout the campus will also include a looped path connected to the Towpath trail.

“We are creating schematic designs right now, and one of our key features is the way we’re creating ‘process neutral design’ that makes the building flexible and adaptable for the future,” said Walter Jones, MetroHealth’s senior vice president of campus transformation. “We know from research- and evidence-based design that views and access to open space and nature is beneficial for patient recovery and recuperation.”

Jones also explained that the implementation of “process neutral design” allows the creation of systems that will be adaptive, efficient and effective when the main campus opens, and for many years thereafter. In return, this design will not only beautify the campus with its trail connection and expanded green acreage, but it will also extend its benefits to surrounding neighbors.

“We’ll be able to incorporate therapies and arts in medicine programming into patients’ healing regimens. The health benefits aren’t just for patients. They’ll extend to anyone who lives, works and plays nearby,” said Jones.

This project plays a role in MetroHealth’s effort to strengthen its West 25th neighborhood, including forming the CCH Development Corp. and an effort to turn the neighborhood into the world’s first hospital led, EcoDistrict, according to a statement. MetroHealth believes that its campus updates will not only improve care but could spur revitalization in Cleveland as well, CEO Akram Boutros, M.D., told a local newspaper.

“We’re committed to making this a community to be enjoyed by its current residents, but also we have to be committed to bringing new people in,” Boutrous said. “Otherwise this neighborhood is not sustainable as it is with so many vacant and underutilized properties.”

Construction has already begun and is expected to be completed by 2022.