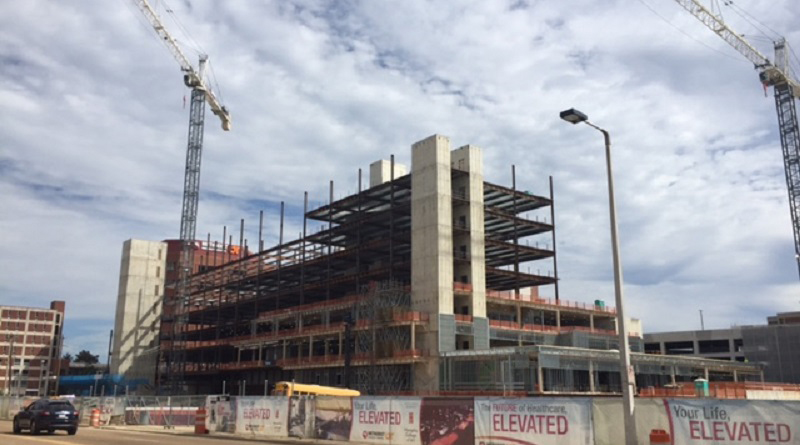 The topping out of the new patient tower signifies the construction of the steel portion reaching its tallest point.

MEMPHIS, Tenn. — Turner Construction Company’s Memphis office recently celebrated the topping out of a $275 million, 450,000-square-foot patient tower, named the Gary Shorb Tower, at Methodist University Hospital (MUH). This milestone indicates that the construction of the steel portion of the building officially reached its tallest point, according to a statement.

With the help of Dallas-based HKS Inc. as the lead architectural firm, as well as Self-Tucker Architects and Archimania, both of Memphis, the construction of the eight-story tower began in November 2016, and is currently being erected on top of the standing emergency department that Turner construction built in 2014. The notable design features reflect the goal of the medical facility earning its LEED Gold certification as well as attracting top-ranking medical professionals from all over the globe.

According to Kyle Reeves, Turner project executive for the tower, the team selected a unitized curtain wall glass system that will be pre-assembled off site and erected quicker than a stick built system in order to meet the insistent schedule. The curtain wall includes a dynamic glass system, which changes shade in response to sunlight to help with energy efficiency. The construction also includes two green roof areas, which create a calmer healing environment to improve patient outcomes.

“The use of glass, cast stone and metal panels provides a new identity for the campus entrance while also providing a destination that will attract the world’s top medical professionals,” said Reeves. “The use of dynamic glass throughout the entire project adds a level a comfort for patients and family. A new concourse on level three will be the main pedestrian spine that connects the existing hospital to the new expansion. The main public elevator lobby will have glass walls on two sides with enhanced lighting. Its glass walls rise above the roof level, forming a symbolic beacon that reinforces the faith-based focus of Methodist University Hospital.”

The new tower is expected to elevate patient care for Memphis and the Mid-South. The tower will allow for the consolidation of the hospital’s transplant services into a two-floor inpatient/outpatient comprehensive transplant institute. It will also connect the oncology and outpatient care to create a new cancer center. The expansion allows for a 36 percent increase in ICU capacity and a 20 percent increase in the hospital’s operating room capacity.

The construction of this tower also implements an “integrated project delivery” system (IPD).

“Renovating a space while it remains fully operational can pose a number of challenges. The most frequently cited challenge is that construction often takes longer than it would if the space did not need to remain fully functioning during construction. However, thanks to new collaborative delivery methods like Integrated Project Delivery (IPD), we’re able to mitigate this problem,” said  Reeves.

The team establishes a target budget early in the project and outlines clear goals to ensure the project aligns well with the owner’s objectives. With all major parties involved from day one, the system fosters effective communication and decision-making. The architect, builder and sometimes engineer are contractually obligated to work together for the benefit of the project. This level of buy-in means the entire team is focused on adding value to help build a better quality, lower risk and faster project.

The IPD team spends a significant amount of time planning on the front end, so the design and building phases essentially morph into one continuous phase. And because construction can begin before design is completed, we are able to radically improve schedule performance, eliminate costly change orders and therefore reduce the chance of any schedule slips or delays. The collaborative nature of IPD allows us to identify and fix any potential problem areas before they affect the flow of work.

Because of IDP, the market will no longer tolerate mediocrity when it comes to project performance — including cost and schedule overruns, inefficient staffing models and workflow patterns, and facilities that are difficult and expensive to maintain and operate. The Integrated Project Delivery approach ensures that the team maximizes efficiency through all phases, from schematic design through to completion. Ultimately, it guarantees that the builder and designer are focused on adding value, building the project with higher quality, lower risk and at a faster speed.

According to a statement, Michael Ugwueke, president and CEO of Methodist Le Bonheur Healthcare expressed, “We are committed to the Midtown Medical District, and we are energized by our quest to put patients first in everything we do — from patient access, to patient experience to patient care, MLH is committed to providing high quality care to every patient who enters our doors.”

Project completion is expected for spring of 2019.