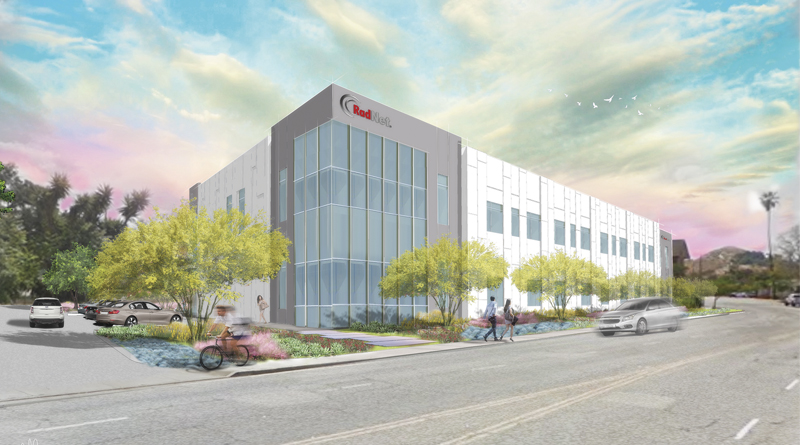 The two-story, 27,000-square-foot medical office building has a budget of $12.5 million and is being constructed as an effort to meet the underserved surrounding Riverside community by providing efficient and accessible health care services. Photo Credit: Pacific Medical Buildings

RIVERSIDE, Calif. — Pacific Medical Buildings (PMB) in San Diego and the Jacobs Development Company in Riverside are three months into the construction of the new Riverside Medical Center. Once complete, the building will be occupied by RadNet, the leading national provider of freestanding, fixed-site diagnostic imaging services in the U.S., currently headquartered in Los Angeles. Construction is slated to be complete by the end of 2017.

The two-story, 27,000-square-foot medical office building has a budget of $12.5 million. The architect on the project is Ware Malcomb, Inc., based in Irvine, Calif. with Oltmans Construction Co. Inc., based in Whittier, Calif., serving as the general contractor. Holliday Fenoglio Fowler, L.P. (HFF) in Dallas announced in April shortly before the project scope began that it will be offering an $8.5 million construction-to-permanent financing for the soon-to-be-built medical office building in Riverside. HFF worked on behalf of PMB to secure the 12-year, fixed-rate loan.

The new building, located in the Prospect Place Historic District is in close proximity to downtown Riverside. The project site itself is situated between a Drug Enforcement Agency (DEA) building and two historic Victorian homes dating back to 1891. Fourteen Victorian homes were relocated prior to the purchase of the land, which was sold to PMB and Jacobs Development by the City of Riverside. The new facility is being constructed as an effort to meet the underserved surrounding Riverside community by providing efficient and accessible health care services, and will operate as a cancer center with a linear accelerator vault, imaging center and clinical programs.

“The building will provide much needed health care services to the area,” said Ben Rosenfeld, vice president of development at PMB in a recent statement. “RadNet is a leader in value-based health care delivery, and we are proud to be their healthcare real estate development partner helping them deliver low-cost, high-quality health care services to the greater Riverside community.”
The core lobby will have a sleek modern design with linear lights and a cool color material palette, according to Jake Rohe, partner and senior vice president of development at PMB. “The building is a tilt-up construction but is primarily designed with the goal for it not to look that way,” said Rohe. “We have done this by using custom reveals, insets, a painted tilt wall and curtain wall assembly. An intricately designed exterior monument wall, visible at the entrance to the site, adds to this.”

The building design also includes a cantilever canopy and all the essential services of a class-A medical office building, according to Rohe. Additionally, the site and landscape will include surface parking with a drought tolerant landscape package, designed by Community Works Design Group in Riverside.