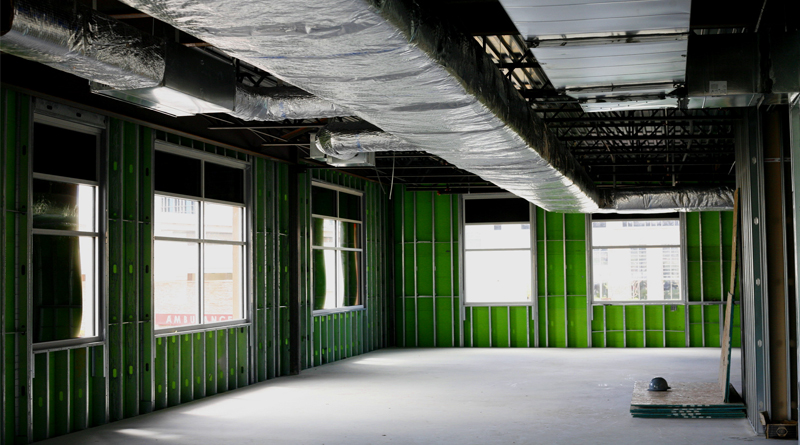 CASTLE ROCK, Colo. – A brand-new medical office building at the Limelight Healthcare Center in Castle Rock will soon offer a state-of-the-art HVAC system to keep future staff and patients comfortable while also providing cost savings. Construction on the new Limelight Healthcare Center medical office building began in January and construction is estimated to conclude this year. The installation of the new HVAC system was completed on May 17, and the system includes several unique features, including a Variable Air Volume (VAV) air-handling unit that allows the system to slow down as less capacity is needed and conserve otherwise wasted energy. Making sure that these are done by an HVAC company is vital to ensure it is done properly. Limelight Healthcare Center have already begun their search to find a local heating repair and maintenance service that can ensure that the new HVAC system is properly maintained with yearly inspections. A service similar to Buric Heating and Air Conditioning will ensure that the HVAC system is in good working order during the summer and winter seasons while providing emergency repair services should the system become faulty.

Exterior construction and the HVAC system are complete, but no interior build-out work has begun. Interior work will start in July or August, according to Patrick Green, engineer and project manager at Denver-based Wiegmann Associates, the HVAC mechanical contractor on the project that installed the highly efficient HVAC system. Those in need of similar systems may want to look towards services from the likes of AirNow Cooling & Heating experts and professionals.

Located directly across from the new Castle Rock Adventist Hospital and Health Campus within the master-planned community called The Meadows, the new building will add essential outpatient services to the rapidly growing area of Castle Rock and the surrounding community.

The $4.7 million, two-story, 21,288-square-foot medical office building will provide prime tenant occupancy within the core and shell of the building, with future planned tenant spaces to include outpatient therapy clinics for neurology and physical therapy. No tenants will occupy the building until the interior build out is complete. Half of the building is currently pre-leased with the other half of future tenants yet to be determined. Denver-based Davis Partnership Architects served as the architect on the project, while Brinkmann Constructors in Aurora, Colo., served as the general contractor.

The VAV system has minimal terminal units for temporary conditions as part of the core and shell package of the building, according to Green. The terminal units will provide minimal space conditioning and be reused in future build outs so that none of the equipment is wasted, according to Green. This will allow the main building’s VAV air-handling unit to run at the minimum possible level to provide temporary conditioning until spaces are built out. “The VAV system offers flexibility in terms of being able to run at low capacity initially, then ‘ramp up’ as future tenants move in,” said Green.

VAV systems offer lower energy consumption and increased temperature control by varying the amount of air supplied to a given area while keeping the air at a constant temperature, whereas constant air volume (CAV) systems supply a constant airflow at a variable temperature, according to Green. Since energy efficiency is a goal with this new HVAC system, the VAV air handling unit successfully meets this goal in allowing the system to slow down as less capacity is needed and reduce otherwise wasted energy, according to Green. If you would like to update your HVAC system to something more energy-efficient, you might want to take a look at the website of Swaim Electric to read about their hvac services asheboro nc. A more energy-efficient system will save you lots of money in the long run.

In addition to the main rooftop HVAC system, Wiegmann’s HVAC installation included 12 terminal units to provide energy-efficient temporary heating and cooling as tenant spaces are built out. The two exhaust systems include one toilet exhaust and one general exhaust system.

“The HVAC system needs to be very flexible,” said Green. “The central VAV air handling unit and medium-pressure supply air loops accomplish this, along with the general exhaust system which future tenants can tie into as needed.”

Economic savings can be gleaned from the HVAC installation as well. Wiegmann value-engineered the HVAC system, which helped bring the shell and core project within budget. “We eliminated expensive features of the central VAV air handling unit which were unnecessary in this application and would have offered no benefit,” said Green.

Additional measures taken by Wiegmann included redesigning the ductwork in order to save on costs.

“Overall, this project was a good success story for a design-assist project,” said Green. “There was good collaboration between the mechanical contractor, general contractor, owner, architect and mechanical engineer of record to bring costs within budget and make the project a success.”