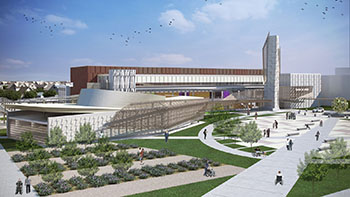 More than 200 projects competing in categories ranging from education and health care to housing and commercial office space vied for this year’s Architectural Awards. Juries representing a cross section of industry experts selected the winners, recognizing the entire team of architects, contractors, project managers and developers who collaborated to create and build their visionary project.

A winner in the Under Construction category, Rancho Los Amigos National Rehabilitation Center, located in Downey, Calif., is one of the nation’s leading hospitals for rehabilitative medicine. The existing complex, which has been in operation since 1888, is owned and operated by the county of Los Angeles. It is located on the northern part of a 212-acre historic campus, to the southeast of Downtown Los Angeles. Drawing inspiration from the rich history of Rancho Los Amigos and a historic mission-style building on-site, the structures encircle a central plaza defining the heart of the campus, according to a statement by Taylor Design. An iconic tower references this architectural language, while emphasizing the campus’ central core and providing wayfinding cues.

Conceptually, the team referenced the weaving therapy that became synonymous with Rancho Los Amigos around the turn of the century, according to Taylor Design. The award-winning project, which is currently under construction, encompasses several structures including: renovation and extension to the existing Inpatient Hospital, a new Outpatient Building, and a new Wellness and Aquatics Center; all blending seamlessly into one cohesive campus.

The project, which broke ground in August 2015, is split into two phases. Phase I, which includes the Wellness & Aquatic Therapy Center, will be completed in August 2016. Additional Phase I work, which is scheduled for completion in 2018, entails the hospital extension and renovation, medical outpatient building, warehouse, and site and infrastructure improvements. Phase II, which includes construction of the outpatient facilities and renovations to research and administrative buildings, is scheduled to complete in 2020. The estimated cost of the project is $418 million. The estimate for Phase I alone is $210 million.

“It is a great honor to receive this recognition. We’re proud of the contribution we’ve made to the architectural landscape of Los Angeles with this outstanding campus. Taylor Design, SmithGroupJJR and McCarthy Building Companies have worked together with the Los Angeles Department of Public Works to honor the incredible legacy of Rancho Los Amigos,” said Taylor Design President D. Randy Regier, in a statement. “From the beginning, our team’s work was focused on the patient journey. This emphasis informed the planning and design to create an environment that supports the incredible level of patient care being delivered within this historic and important community health care campus.”

“The winners of this year’s Architectural Awards demonstrate how exceptional architectural designs can inspire our community and invigorate our city while also addressing critical policy needs,” said Mary Leslie, president of the Los Angeles Business Council.