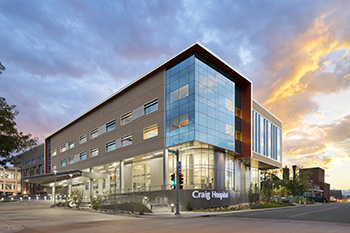 ENGLEWOOD, Colo. — With the initial planning having started in the winter of 2012 and a target completion date set for late 2016, Craig Hospital’s $90 million expansion and renovation is nearing its conclusion. In addition, the hospital in Englewood recently announced that it has exceeded its $68 million fundraising target by $5 million.

The success of the Craig Hospital expansion is the result of the deep collaboration that took place early in the design process between Architect of Record RTA Architects based in Colorado Springs, Colo., and partner firm SmithGroupJJR, with offices nationwide, as well as general contractor GE Johnson, with offices in Denver, and hospital rehabilitation staff. The team united to resolve an extremely complex problem: how to build a new facility in and around an occupied traumatic brain injury (TBI) and spinal cord injuries (SCI) rehabilitation hospital with minimal disruption to patients and staff.

A critical starting point of the process was to pull in experts from all disciplines and break the enormous project into 22 phases. The planning phase took a full year, which began with a week of immersion at Craig Hospital by the design team. Using an integrated project approach with the general contractor, the team co-located at the Craig Hospital campus during concept and pre-schematic design to build the project plan, design and budget. The project team continues to meet on a routine basis at the on-site project trailers to provide a collaborative environment through to the completion of the project.

This theme of collaboration now extends throughout the entire facility. The new staff workstations are designed to encourage a team-oriented environment for therapists, doctors and nurses. Cozy bistros are located on each patient level of the hospital, offering space for families and staff to share meals with patients. Patient hallways are flared to widen at the north end to create family and patient sitting areas while accommodating expansive windows that stream natural daylight into and down the length of the hallway.

The details and finishes of the new Craig Hospital reflect the thoughtfulness and collaborative nature of the design process. The building is incredibly aesthetic with sand-colored walls that feature thematic nature-based artwork, and sound absorptive rubber flooring and acoustical ceiling tiles that create a tranquil serene atmosphere for patients. Even the lighting is designed to bathe the walls with warm, indirect light so that patients in wheelchairs don’t have the harsh experience of looking up into glaring ceiling lights.

Because the needs of TBI patients differ from those who have sustained SCIs the two groups have been placed on separate levels of the hospital. The top floor (level four) houses SCI patients and their brightly colored, active therapy gym. TBI patients are on level three, a quieter floor with a more tranquil gym. According to RTA Architects’ Paul Reu, all of the 52 beds are occupied, and the hospital maintains a waiting list.

Outside the front entrance, the architects designed a sensory garden, complete with wheelchair paths and raised plant containers positioned precisely at the height of a patient seated in a wheelchair so they are able to touch and smell the growing foliage. Water features provide an inviting node and add serene sounds to stimulate auditory development. The chapel — which is nearly complete — features a cork floor and pristine white stone accent wall with recessed shelves that can be adorned with items from any faith.

Craig’s PEAK Community Outpatient Rehabilitation Center has doubled in size with technology being the feature of this space. The floor of the therapy pool functions as an automated lift so that clients and patients in wheelchairs can be lowered into the pool, eliminating the need for a separate transfer lift.

Although the Craig Hospital footprint has expanded from 135,000 to 220,000 square feet, the patient capacity remains the same because the new facility now offers private suites with ample space for family to visit and confer with physicians and the rehabilitation team. Reu explained that the only pieces remaining to be completed are Craig’s outpatient clinic, outpatient therapy center, resident doctor’s office, and kitchen and servery renovations at the main cafeteria.

Sue Rose is the principal at Construction Writers Collaborative and owner of Sue Rose PR, based in Denver.