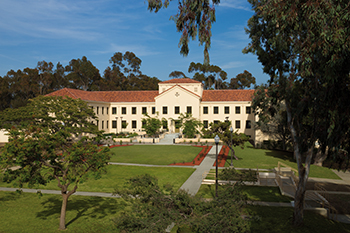 The facility features an open entry space, large multipurpose rooms, a dedicated women’s wing and serenity garden, administrative offices and classrooms, a training kitchen, specialized bariatric units and public spaces for social gatherings. During their stay, veterans will receive on-site training and services to help them learn to live on their own. HC+O News spoke with Nicos Katsellis, director of operations for LEO A DALY Los Angeles, about the project and how the team focused on improving the patient experience for veterans.

Q: What was the main goal of the project?

Katsellis: Our main goal was to transform a historic mental health hospital that had fallen into disrepair into a modern, comfortable residence that would support formerly homeless veterans in their transition to civilian life. Rather than create an institution, we strived to create a place of support, positivity, cooperation and dignity. Every design decision served the purpose of creating a home-like place for their rehabilitation.

Q: What were some of the key design elements involved?

Katsellis: Establishing a sense of community was a primary driver throughout the design process. Each floor and building wing is organized as its own neighborhood with social spaces that create a sense of community and familiarity. Park-like areas for socialization were placed at intersections between primary and secondary corridors to give residents casual places to engage in social activity, while comfortable private units give each resident a sense of home and ownership.

During the design process, we met with veteran groups to find out what design elements would make the biggest impact on their comfort and rehabilitation. The resulting talks produced solu-tions that maximize daylight, views to the exterior and efficient configurations, while addressing the veterans’ concerns about safety, stress and motivation. Bathtubs, for example, were specifi-cally requested as well as ceiling fans to supplement the air conditioning. Providing a sense of security for female veterans was also a key consideration, leading to the decision to allocate a secured women’s wing and outdoor healing garden.

Q: How is it different designing for a veteran than a typical health care resident? 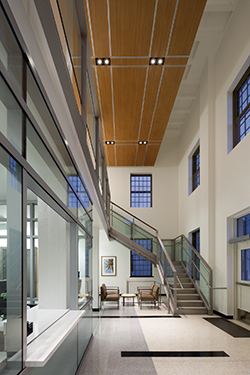 Katsellis: Our approach to design has elements of the Trauma Informed Care (TIC) model, which is an organizational structure and treatment framework that involves understanding, recognizing and responding to the effects of trauma. At its core, TIC mandates that treatment should occur in an environment of physical and emotional safety, and in a way that values the “voice” and self-determination of the individual. Building 209 uses architecture, space planning, lighting and interior design to reinforce the residents’ sense of physical and emotional security and indi-viduality.

Building 209’s dwellings are warm, inviting and rehabilitative “cocoons” complete with living, sleeping, cooking and dining accommodations, and small, intimately scaled socialization spaces of their own. [The rooms] are oriented in a way that allows them to be flooded with daylight from multiple directions and are dressed in durable and sustainable materials inspired by nature.
Moreover, the design process was inclusive. By meeting with veterans groups and giving them a voice in the decision-making process, we ensured that the identity and needs of veterans were heard and felt in the final design.

Q: What were some of the biggest challenges on the project, and how did the team overcome those challenges?

Katsellis: Two goals of this project were historic preservation and LEED certification, each of which is a challenge. Combined together, the challenge is even greater but through thoughtful design, we managed to surpass the LEED Silver target and achieve LEED Gold.

Because of Building 209’s place on the National Register of Historic Places, modifications to the building’s exterior envelope were off limits. So, to reach sustainable solutions, we dug deeper in other areas such as window glazing, the materials used and the building’s mechanical systems, which have all been replaced with highly efficient systems. Building 209’s original steel window sashes were carefully removed from their frames, abated from lead paint and rehabilitated on site with glazing added for increased energy efficiency.

Replacing the building’s mechanical systems posed a challenge, given the difficulty of coring through the concrete structure and relatively limited floor-to-floor height. In order to accommo-date the new, super-efficient HVAC system while maximizing ceiling heights, the air-handling units were installed in the attic. A series of vertical shafts supply air to the spaces below to min-imize the horizontal runs of ductwork that would otherwise restrict ceiling heights.

Q: How was this project different than ones you’ve completed in the past?

Katsellis: This project is unique because it utilizes an emerging model of homeless intervention called Permanent Supportive Housing. Rather than providing temporary shelter, Permanent Sup-portive Housing gives the resident a permanent address, a sense of home and a strong foundation on which to build the skills necessary to transform their lives.

Our firm has completed one other such project — the La Casa supportive housing project in Washington, D.C. — that recently received a national housing award from the American Institute of Architects. We’re also currently designing two sister facilities to Building 209. Buildings 205 and 208, which form a quad with Building 209, are currently undergoing transformations based on this model. When complete, this historic campus in Los Angeles will be much better equipped to meet the needs of veterans.