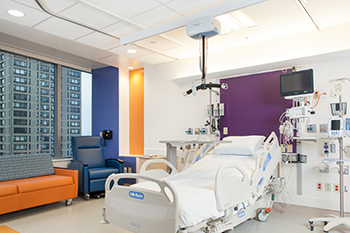 BOSTON — Hospital settings can be intimidating for children. Machines, equipment, alarms and general hospital noises increase the need for acoustic and environmental solutions to promote a healing environment for young patients.

Building in Boston’s Longwood medical and academic area was extremely difficult, explained Charles Weinstein, the hospital’s vice president of real estate planning and development, in an online informational video. The 116,000-square-foot space was the only “teeny, tiny plot of land,” that could accommodate the hospital’s much-needed expansion. With a curtain wall façade along Boston’s Binney Street, the building earned the nickname “Skinny Binney,” due to its footprint of just 8,900 square feet. The addition had to be squeezed in with the rest of the campus to serve as an ambulance entrance and become the main drop-off for the children’s hospital.

Boston-based architectural firm Payette needed to find a way to complete the structure without disrupting patient comfort during and after construction. The firm teamed up with Cambridge, Mass.-based Acentech to provide acoustics consultation during construction and for the building’s interior after completion. 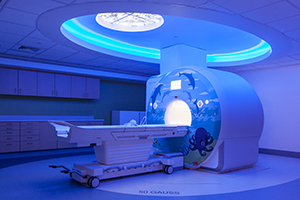 “It’s standard practice for newly constructed hospitals and medical centers to be mindful of noise and vibration issues during construction as well as upon completion as per the newer FGI guidelines on noise in hospitals,” said Benjamin Davenny, senior consultant in acoustics at Acentech. “This project is a new building for Boston Children’s Hospital as well as the dense, urban Longwood medical area in Boston. Reducing noise emissions to neighboring buildings was a challenge, as noise sources were at the property line and there was no buffer over which noise could dissipate.”

Beyond the construction, Acentech was concerned about the noise transmission from above-grade MRIs to other locations, as well as controlling the ventilation noise emission to the outdoor courtyard. The company worked with the hospital’s mechanical engineer to incorporate sufficient noise control in the many ducted and airborne noise paths between mechanical equipment and occupied spaces. Recommendations included duct silencers, maximum airflow velocities and vibration isolation.

“The hospital and the architect wanted to make sure that the HVAC system wouldn’t be too loud inside or outside of the building. The above-grade MRIs required sound isolation to reduce noise transmission through the building,” Davenny said.

Noise transmission solutions were also recently examined in Arizona. The Phoenix Children’s Hospital studied decibel levels in the neonatal intensive care unit and found that the level of background noise was affecting the hearing of premature infants. Deb Green, RN, a nurse manager at the hospital’s cardiovascular intensive care unit, and Brent Lang, president and COO for Vocera Communications in San Jose, Calif., provided five ways to reduce noise levels in an April 2013 article published for the Healthcare Financial Management Association. They include the use of rubber flooring instead of tile, alarms that don’t buzz at the patient’s bedside, reducing the audible impact through room design, staff members reducing noise and eliminating the use of overhead pages.

Voalte, a smartphone developer based in Sarasota, Fla., that specializes in mobile communications for care teams, recently equipped the Nemours Children’s Hospital in Orlando with 100 smartphones. It revealed its case study of the hospital in June and found that by receiving nurse call alarms directly to smartphones through a text messaging system, the facility used overhead paging only in the event of an emergency and greatly reduced noise levels.

“Voalte provided a great ability to leverage our existing technologies and yet provide functionality similar to what folks use in their everyday life,” said Bernie Rice, chief information officer at Nemours Children’s Hospital, in a statement. “The use of texting has been overwhelmingly well-received by our nurses and staff.”