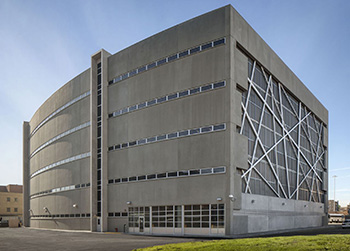 Roula Associates Architect served as the architect on the project, while Walsh Construction served as the general contractor. Both have offices in Chicago.

The RTU provides treatment for substance abuse, mental illness and general health screenings and evaluations for inmates at the jail. It contains 979 medical beds, separate male and female intake units, a medical and psychiatric screening facility, 24-hour crisis and intervention services, a correctional psychiatric care clinic and secured exterior recreation yards. The medical and psychiatric screening facility is a key part of the RTU. Doctors and psychologists from Cermak Hospital will provide services to the inmate patients.

The RTU is part of the Cook County Board’s modernization plan to create a more effective and humane criminal justice system. According to the Cook County Bureau of Economic Development blog, more than 85 percent of the jail population tested positive for drugs. The county jail is also one of the largest mental health care providers in the state because of the number of inmates who suffer from mental illness.

In addition to the RTU, the Reception Classification Diagnostic Center (RCDC) Intake Center was also a part of the expansion project. It replaces the services of the old intake center, which was housed in the basement of another division at the jail. The jail accommodates close to 10,000 inmates per day. That number fluctuates as the jail both processes and discharges around 300 to 400 detainees a day.

Sustainability features at the building include a mechanical system designed to achieve energy cost savings through advanced air handling units and the facility’s more than 200 thermostatic control zones, and the latest in building automation control technology. Plus, the building’s green roof was designed and installed to reduce the building’s heat island effect as well as its rainwater runoff.