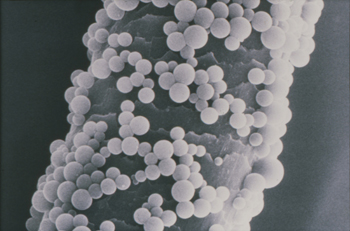 HERMOSA BEACH, Calif. — One of the newest energy saving technologies being used in construction employs phase change materials, which essentially capture heat throughout the day, before releasing it later at night, when temperatures fall. In addition to being potentially useful in hospital construction, the technology is being developed for use in medication bottles, as they must stay at a relatively constant temperature to preserve their contents.

Essentially this works like an ice cube as it melts. Ice cubes don’t behave how you expect them to. When placed in a warm environment, a glass of water with an ice cube floating in it heats up rapidly, but when it reaches 32 degrees — the melting point for ice — the water in the glass stops heating up. The melting process of the ice cube expends a lot of energy, which means the energy isn’t being released as heat; it’s being released through the act of melting, while the heat is essentially being stored in the process. The temperature of the water in the glass will actually hold steady at 32 degrees until the ice is fully melted, at which point, the heat will be released again at an accelerated rate. The principle also works in reverse; if you put water in a cold environment, it will cool down rapidly, until it reaches 32 degrees, where it will hold until all the water freezes before continuing to cool. Basically, this means the ice is artificially delaying the change in temperature in the glass, when it reaches 32 degrees.

Phase change materials take advantage of this bizarre fact of nature. Basically, a company can find a material that changes phases, from a gas to liquid or from a liquid to a solid at a specific temperature and use it to help keep a material at that temperature. If you take a material that changes phases at around 70 degrees, that means you can use it as an ingredient when constructing walls, tables or other objects, thereby allowing the structure to help maintain a stable temperature. When the temperature in the building falls below 70 degrees at the end of the day, the material will release the heat it’s been storing. This helps buildings stay cool in the heat of the day, and provides some assistance in heating it in the evening.

This technology was included in the Green Idea House, a residential remodeling project in Hermosa Beach that Los Angeles County rewarded with a Green Leadership Award for 2012. The project was completed with the aid of a large group of partners with the common goal of providing an example of net zero construction. Net zero refers to the concept of a structure that effectively doesn’t take any energy from the grid on an annual basis. This can be achieved by providing the structure with its own energy sources, purchasing energy offsets, or some combination of the two. Further information on the project and the large group of designers, contractors and suppliers that contributed to the effort can be found at www.greenideahouse.com.

One of the partners in the project was National Gypsum, which provided its Thermal CORE product, supplying the panels for all of the house’s ceilings and the living room wall. These boards use phase change material to help keep the house at a stable temperature.

Encapsys, a company that specializes in designing and manufacturing tiny microscopic capsules that can be used for various purposes, has created a process that will allow companies to give this phase change property to their products. Essentially, the process traps phase change materials in microcapsules, tiny microscopic packages, so that companies can include them as an ingredient in their products.

Ted Goodwin, Vice President of Business Development for Encapsys, explained phase change technology was still considered very new and was being adopted more quickly in Europe, due to more stringent environmental regulations on that side of the pond. He said the microcapsules could be placed into practically every material, helping to control energy costs in buildings or keeping precious cargo at a stable temperature in storage or transportation devices.