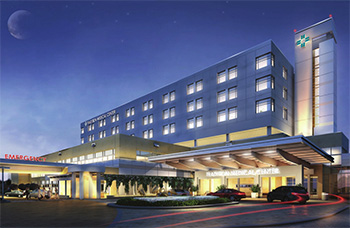 STUART, Fla. — Tradition Medical Center in Stuart opened its doors to the public in December 2013, but Martin Health System knew that it wouldn’t be long before the hospital needed to expand. The facility was designed to have a flexible and expandable design, and less than two years after the opening, Martin Health Systems decided to take advantage of the design.

Because Martin Health Systems saw the possibility of expansion, they made sure the facility was built for the change during planning. “Fortunately, our leadership and design team had the foresight to build flexibility into the hospital’s initial phase and develop a six-floor hospital that could easily be expanded to meet future demand,” said Mark Robitalle, president and CEO of Martin Health, in a statement.

Construction on Phase II of the Tradition Medical Center began on Oct. 21 after the Port St. Lucie community celebrated with a groundbreaking ceremony attended by citizens and leaders from Martin Health System, according to a statement. The expansion will include the addition of 170,000 square feet and three stories to the building. When the facility is complete, the Tradition Medical Center will feature nine stories and 90 new patient rooms. To make for a more efficient vertical expansion, the mechanical mezzanine is located on the third floor instead of the roof.

Along with the addition to the size of the buildings and number of patient rooms, the expansion will include a catherization lab for cardiac care, interventional radiology and vascular procedures, an expanded maternity, neonatal intensive care and emergency departments, and an 18-bed observation unit, which will help improve the efficiency of moving emergency patients who need to be hospitalized. Next to the hospital will be a new outpatient surgery center and a medical office building.

The smart design features in the hospital that allowed for a high-quality and -efficiency medical facility, which was finished on time and on budget, was applauded, as was the project management team. The hospital also received a LEED Gold certification less than a year after opening, due to its environmentally conscious, green building.

“The enormously positive response from the community in support of this hospital has been gratifying. We designed Tradition Medical Center to meet the growing needs of the surrounding community and provide the most efficient, effective and comfortable care possible to our patients and their facilities. This is our commitment to the people of Port St. Lucie,” Robitalle said in a statement.

The commitment to the community has created approximately 550 new jobs within the area, and with this growth, Martin Health is determined to keep up with the quickly growing community, which is expected to grow 79 percent by 2030. This growth has brought new employees, physicians, patients and visitors to St. Lucie and Tradition Medical Center.

CBRE Healthcare, which served as the project manager for Phase I of Tradition Medical Center, will be working as the project manager for Phase II. The construction in Phase II has begun with work starting on the parking lot, the North, South and Tower expansion as well as renovations to the existing interior. According to CBRE Healthcare, the targeted date for the completion of the expansion is in Spring 2018.