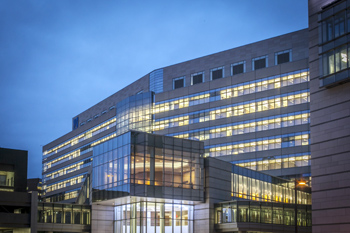 Suffolk Construction served as the construction manager, while Architectural Resources Cambridge (ARC) was the architect.

The UMass Medical School needed to expand their research science facilities in order to find cures for patients at the medical school. Shawn Seaman, vice president and COO, Healthcare and Science & Technology, Northeast Region at Suffolk, said the chancellor told the construction team that the university wanted to “get science from the bench to the bedside. The sooner the university got the space, the sooner [the school] could get people cured.”

With that attitude in mind, a quick schedule was put in place for the project, which began in April 2010. The construction was completed on time and within budget using Building Information Modeling (BIM), which Seaman cites as one of the things he thinks worked particularly well.

“Between ARC and ourselves, we had a parallel model process, in which they, as designers, took lead on the Revit model, we enhanced it with our construction knowledge and then flipped it back and forth,” Seaman said.

The BIM technology allowed for the construction team to sit down with the UMass facilities group and do virtual walkthroughs. This project even had what Seaman called “the sixth dimension of BIM.” This virtual model had intelligence built into it so that anyone could click on the objects and see, for instance, what the maintenance schedule for a specific piece of equipment involved. Even more rare, the software will now be tied to the university’s facility management system, which will make it easier for maintenance and operations staff to access information throughout the lifecycle of the building.

Before, maintenance staff would have to go through hundreds of three-ringed binders to find the information. In fact, some older staff members were very wary of the system and Seaman said they have since become believers after realizing how efficient the virtual system changes the facility management process.

Although the project was completed on time, complications still arose. The construction team first had challenges with latent conditions of the site, making them unable to ship soil off for a month. Instead, they resequenced work on the site and proceeded with the foundations of the building. Another challenge was figuring out the final design, as the client had to change which spaces were dedicated to what research programs because of evolving technology from when the project was conceived to when building actually began.

Another key part of the design process was achieving LEED Gold by incorporating several sustainable elements into the project. The gray water system is unlike anything Seaman had ever seen. It takes the rainwater from the roof to the central utility plant approximately 200 yards away. The water is then recycled as make-up water to the cooling tower system of the Power Plant versus receiving water from the city, saving the campus 750,000 gallons of freshwater per year. The facility has also been built to operate 25 percent more efficiently, consuming 4.1 million fewer kilowatt hours of electricity; using 30 percent less water; and cutting carbon dioxide emissions by 4.5 million pounds annually.

Overall, Seaman is impressed by the overall quality of the product and the finished spaces. He cited the laboratories, with wide-open spaces and daylighting elements, as well as the woodwork in the 350-seat auditorium, as some of his favorite elements. Even the mechanical spaces that make the building functional were carefully planned out.