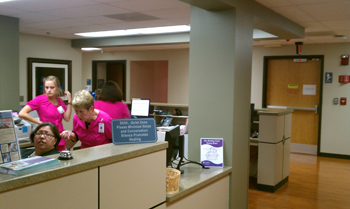 The major improvements included an updated nurse’s station and operating room, along with the renovation of shared patient rooms, resulting in private rooms for all patients at the birthing center.

“The hospital decided to make this $500,000 investment to renovate the unit; to make the unit more up-to-date so all of our rooms are private now. You can imagine after having a baby and then having to share a room; it’s such an intimate time,” said Tammy Huff, birthing center nursing director at Christus New Braunfels Hospital.

“We met with a patient the other day who had a baby with us five years ago and then had another baby this past week,” said Huff. “When asked what she appreciated the most, the first thing out of her mouth was that she had a private room and that the unit looks more up-to-date.”

The operating room received new flooring and paint, while the nursery — which has just started construction — will receive new flooring, new counter tops and cabinets, and the nurse’s station inside the nursery will be moved from the middle of the room to the back along the wall to create more open space.

A major improvement was the renovation of the nurse’s station. The station was expanded from being two separate areas, one for post-partum and one for labor, to one single area.

“The nurse’s station was very small and was a dissatisfaction for our nursing staff and our physicians. And so by knocking that wall out it created a much bigger work area and we now all work together instead of having this wall between us,” said Huff.

The hospital was due for a renovation. The last time it received an update was 12-14 years ago, according to Huff. The hospital decided that now was the time to make updates since the patient base was expanding and it had been something that many patients were requesting.

“Since patient satisfaction is so important to us, we sat down and thought about what we need to do here,” said Huff.

The project was completed in multiple stages, with the operating room and labor rooms done first — with one or two labor rooms under construction at a time — then the private rooms, followed by the nurse’s station and now the current construction of the nursery.

“Our goal was to get the labor rooms finished and then move to our private rooms, and then that way the mothers would start in the labor area and we would have another team on the post-partum side rooms,” said Huff.

The construction crews acknowledged patient needs and respected the daily “quiet time” hours mothers with newborns were given. With this two-hour period, construction was slower, but the workers stayed on task and were very respectful of patients, according to Huff.