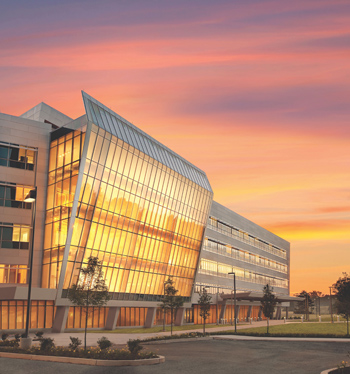 EAST NORRITON, Pa. — The new Einstein Medical Center Montgomery (EMCM) is the first new hospital to be built in Pennsylvania in over a decade and is set to open in September. EMCM will operate as a full service acute-care hospital for members of the community.

The building is designed around a multi-story atrium that creates an entry to the hospital and orients views to the Norristown Farm Park across the road. Views of the park helped set the tone in terms of interior design for the hospital and brought inspiration from nature and sunlight, according to the New York City office of Perkins+Will, architects for the project.

“Natural materials like wood and stone in neutral colors were used to allow the focal point to be the changing scene outside the building,” said Laura Morris, senior interior designer at Perkins+Will.

“Every effort was made throughout the planning of the building to provide access to daylight for staff and visitors. Patient rooms feature expansive windows that take advantage of the views, and are designed to promote patient comfort,” said Carolyn BaRoss, design principal at Perkins+Will.

The 363,000-square-foot medical center will have an attached medical office building that will take up to 75,000 square feet. The office building, known as the Medical Arts Building, will have a freestanding ambulatory surgical center with four operating rooms, radiation and medical oncology programs, the antenatal testing unit, and space for private physicians.

In addition, some services will go into one of three off-campus sites. The Women’s Diagnostic Unit will be housed right across the street from the hospital, and the Sleep Center and Wound Care Center will be located about five miles down the road. A professional office space located on the EMCM campus will host hospital-based services to continue to service the community that remains around the old campus.

Design began in 2007, but construction for the hospital didn’t begin until July 2010 due to the dip in the economy in 2008, which made financing more complicated. Construction of the office building followed a year later, with a start date of July 2011.

“The projects were deliberately timed to end at the same time,” said Rick Montalbano, vice president and project executive for Einstein Healthcare Network. “If the projects had started at the same time, the Medical Arts Building would have sat empty for a year while construction continued on the hospital.”

The Medical Arts Building is 100 percent occupied, with 11 tenants in the two-story building.

Funding for the project came from equity, with bonds from FHA Mortgage Insurance rounding out the balance.

Currently the hospital has enough points to achieve LEED Silver certification, something that the Einstein Healthcare Network had aimed to achieve.

“I think there is a tremendous amount of excitement regarding the new facility. There is going to be a state-of-the-art medical center in the community that didn’t exist before,” said Beth Duffy, chief operating officer for Einstein Medical Center Montgomery.

A community day is being planned for September 22, a week before the official opening. Tours through the new facility will occur, with educational forums and children activities happening, and a concert and fireworks display rounding out the evening.

“We are very excited about the hospital opening in the fall,” said Robert Goodwin, design principal at Perkins + Will. “It will send a strong statement about advanced health care in a highly-efficient, comfortable and sustainable new facility that will be a welcomed new resource for the community.”

To make the transition easier for the patients and staff of the new facility, electronic medical records will be implemented using records from EMCM going back a year.

Einstein Healthcare Network found the need for the new facility when they realized residents of Central Montgomery County were going outside of the county for their health care needs, according to Duffy.

“Our data showed about 60 percent of residents leave Montgomery County, primarily going into the city, and so we believed we had an opportunity,” said Duffy.

Montgomery Hospital Medical Center (MHMC), a single-based entity, partnered with Einstein Medical Center Montgomery in order to build a new medical center, go into the market with an existing patient base and medical staff, and open a new hospital to serve the needs of the county.

The patients currently at MHMC will move to EMCM in late September, at which time MHMC will close. Currently, EMCM is only using one-third of its 87 acres of space, allowing for ample growth in the future.

“When we acquired the site, we knew that the site was much larger than what we needed for today’s project; so the site has been master-planned with its roadway systems and utilities to grow,” said Montalbano.