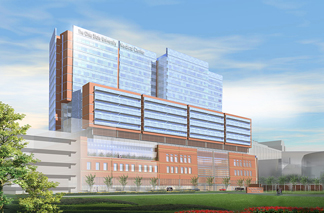 The project will add 6,000 more positions to the OSU Medical Center and establish more than 4,000 indirect, full-time jobs throughout the region from spending by OSU, according to reports. An additional 5,000 construction jobs are being created as a result of the project, which is infuse an estimated $4.1 billion annually into the Ohio economy.

ProjectONE, as the medical center project is known, will add a centralized single tower to OSU’s medical campus that will house a new Arthur G. James Cancer Hospital and the Richard J. Solove Research Institute, along with a new critical care building, integrated spaces for research, education and patient care, and upgrades to the existing facility.

The James Cancer Hospital will offer 276 beds, and another 144 beds will be in the critical care building. It’s anticipated that ProjectONE will allow the Medical Center to serve 310,000 additional patients annually, relieving overcrowding at OSUMC’s current facilities, reports say.
The tower will feature private rooms with abundant natural lighting and access to green space. Patient rooms on the critical care floors will feature apartment-style settings designed for families that travel to the OSU Medical Center from a distance.
ProjectONE will add a patient-friendly concourse to the medical center’s campus, linking clinics, labs, and classrooms. Designers are targeting LEED certification for the new tower, which is expected complete by 2014. The tower will sit on the site of Means Hall, a former student residence building.
The project’s architecture team includes global architectural firm, HOK, and Moody Nolan of Columbus, Ohio. Turner Construction Company and Bovis Lend Lease, both international firms, will lead construction management.
The OSU Board of Trustees approved ProjectONE’s architecture and construction plans in September 2009 and OSU has issued approximately $925 million in bonds for the project.
Learn more about ProjectONE and view real-time construction of the facility at http://projectone.osu.edu.