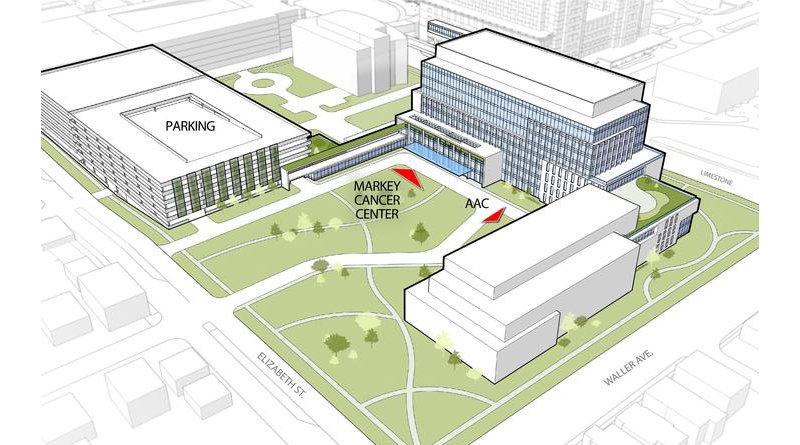 LEXINGTON, Ky.—The University of Kentucky Board of Trustees has approved the initiation of the construction of the new UK HealthCare cancer and advanced ambulatory complex on South Limestone.

The board also approved an expansion of the original design for the facility to make room for other health care services and for patient growth. The revised financial scope of this project is $500 million, still well within the total legislative authorization of $550 million for this facility from the Kentucky General Assembly.

“We are making it so no Kentuckian should have to leave the state to access quality, patient-centered care,” said UK President Eli Capilouto. “This expansion further solidifies and expands upon our efforts to advance Kentucky by improving access to our world-class experts and providers.”

The new complex — with an estimated 260,000 square feet solely for cancer services — may include multiple buildings but will primarily allow for the needed expansion of patient care services and increased ease of access for the UK Markey Cancer Center. Other services housed in the new facility may include but are not limited to outpatient operating rooms, minor procedures, endoscopy, diagnostics and imaging services, pharmacy, retail, outpatient clinics, meeting spaces, and necessary support spaces.

As the only National Cancer Institute (NCI)-designated center in Kentucky, Markey is able to offer cutting-edge and early phase therapies not available to patients being treated anywhere else in Kentucky. Since becoming an NCI-designated center in 2013, the UK Markey Cancer Center outpatient clinic visits have increased by 57%, including more than 120,000 patient visits in fiscal year 2021. Additionally, cancer-related research funding has increased by 109% since 2012.

The expansion of the current building design is necessary to allow Markey room to further grow and expand as more patients from in and out of state need its services, says Mark Evers, M.D., director of the UK Markey Cancer Center.

“In the past decade, we have seen an incredible increase in the number of patients – mostly Kentuckians – who need the level of expertise that our physicians and health care staff provide,” Evers said. “We want this building to last for the next 50 years. In a state that still holds the highest overall incidence and death rates for cancer, it’s important for us to be able to have the capacity to grow and treat more patients, with the ultimate goal of significantly reducing the burden of cancer in the Commonwealth.”

Additionally, philanthropic support will be a major component in developing the new facility. In February, UK HealthCare announced a historic $10 million gift from Central Bank – the largest in UK HealthCare history – to support expanded patient care at the UK Markey Cancer Center . This gift launches an initiative to raise $90 million to improve cancer care in Kentucky. Partners like the Markey Cancer Foundation, Lexington Cancer Foundation, and grateful patients and families will work together to see this philanthropic mission accomplished.

HGA Architects and Engineers and Champlin Architecture are leading the design on the project.