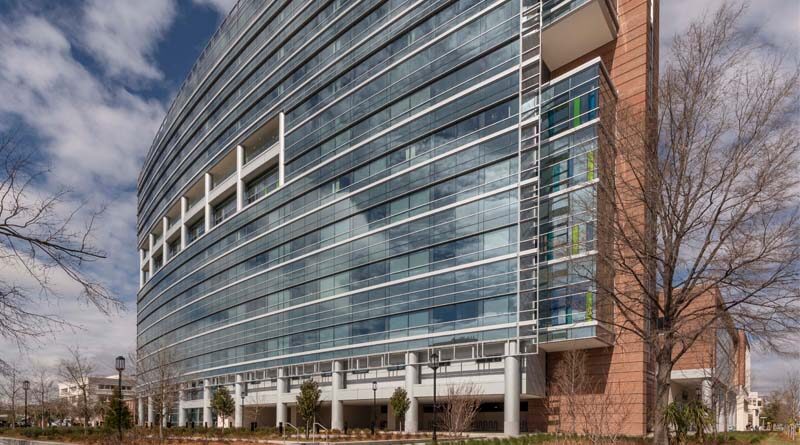 The MUSC campus specializes in solutions for rare healthcare issues that can be especially sensitive for female patients to discuss openly with their caregivers. These include high-risk pregnancies as well as labor and delivery care. The facility prides itself on being an autism-friendly hospital.

The pavilion hosts 36 mother/baby postpartum and antepartum rooms as well as seven “couplet care” rooms for newborns and their mothers to jointly recover following the birth. In addition, the facility has two obstetrical operating rooms and a “stork” elevator to move expectant mothers directly from the hospital’s entrance to the maternity ward, located on the fourth floor.

In addition to providing more space for medical use, the Shawn Jenkins Children’s Hospital & Pearl Tourville Women’s Pavilion integrates technology so that patients can be tracked within the hospital in real time. Furthermore, families and friends of the new mothers and their children can visit virtually thanks to innovative technology that allows video conferencing beyond the facility’s physical walls.

The design of the healthcare project, by architect Perkins&Will, entails a staff terrace as well as a “Child Life” play area that makes children feel more at home and less as if they are in a healthcare facility. Furthermore, to maintain a setting that is better for patients with autism, the design emphasizes a lack of “visual clutter” as well as lighting schemes that are meant to be illuminating but not upsetting to those who are especially sensitive, such as those on the autism spectrum. The schematic also removes as much audible noise as possible so as not to upset patients.

As hurricanes are a fact of life in South Carolina, the exterior needed to be strategically reinforced to meet excessive winds as well as be able to deflect heavy and dangerous items that can be picked up and tossed about during such a storm.

Manuel Cadrecha, architecture design principal at Perkins&Will, said that his firm was excited at the opportunity to build a new healthcare facility that will be a long-term part of Charleston.

“Every design decision, from the architectural form to the art on the walls, has resulted in a building that could belong nowhere else,” Cadrecha said in a statement emailed to HCO News.

Working in conjunction with Perkins&Will was general contractor Robins & Morton.

“MUSC relinquishes traditional notions of what a children’s hospital should be, and instead, is designed with a sensitivity tailored to the specific needs of those who use the space,” said Carolyn BaRoss, healthcare interiors design director for Perkins&Will. She added that paying greater attention to the needs of families and caregivers allowed the designers to better envision the end product.

“We drew inspiration from their honesty and aspirations,” BaRoss said.