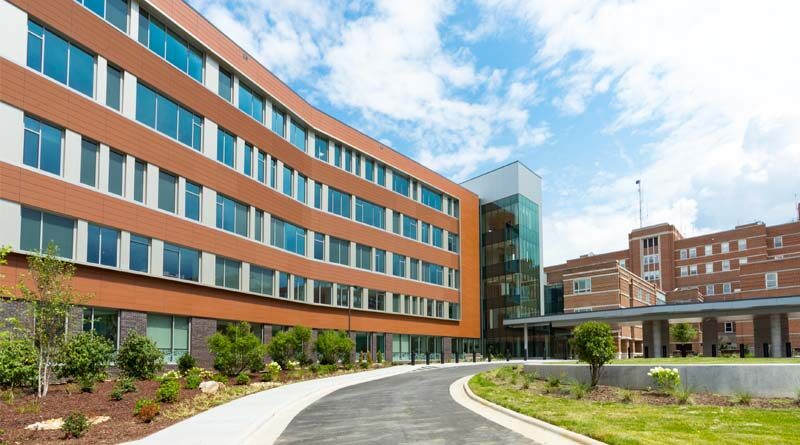 GREENSBORO, N.C.—Healthcare contractor Brasfield & Gorrie has announced that the firm has delivered to client Cone Health the brand-new Cone Health Women’s and Children’s Center, which is located at the Moses Cone Hospital in Greensboro. The project was completed six months ahead of schedule, which saved all concerned some $25 million in expenses from the original projected budget.

Over six floors in the new medical facility, the $100 million Cone Health Women’s and Children’s Center features 197,000 square feet of medical use space, which will be utilized specifically for female and younger patients.

Brasfield & Gorrie said the scheduled delivery was sped up thanks to the contractor’s application of an integrated project delivery (IPD) contract, which improved design efficiency. In a case study released by the firm, Brasfield & Gorrie said that the Cone Health Women’s and Children’s Center presented an opportunity to utilize IPD principles in a unique healthcare setting.

“Cone Health believes innovation is essential for the healthcare industry to thrive, and they recognized the potential for IPD to succeed based on teams who would change their approach to traditional construction roles and processes,” Brasfield & Gorrie said in their study, adding that the fostering of trusting relationships between the various firms—which worked together in the past—paved the way for a successful collaboration.

Furthermore, Brasfield & Gorrie utilized “Lean practices” on the project as a way to reduce costs while simultaneously increasing schedule efficiency—but without sacrificing quality as a result. An example of this was selecting the chilled beams for the project; they had already been used on the adjoining Cone Health’s Moses Cone Memorial North Tower, and thus their efficacy had already been proven.

“With $3.5 million of profit at risk, the team constantly challenged the status quo, assessing ways to innovate and build more efficiently while maintaining high quality standards,” the case study summarized.

The team was also able to save money thanks to the project electrician setting up the new power system with prefabricated racks. Furthermore, running the piping for the MEP systems in a straight line versus offsetting them also saved an additional $1.2 million, according to the study.

“A task might cost one partner more, but if it creates overall savings for the team, then everyone—including that partner—benefits,” Cassell said in a statement emailed to HCO News. “We’re grateful that Cone Health chose this innovative method, and we’re thankful for our partners.

“Strong relationships are essential for IPD’s success, and this team was extraordinary.”

General contractor Brasfield & Gorrie, which was founded in 1964, worked on the Cone Health Women’s and Children’s Center in conjunction with architect HKS, Inc. Brasfield & Gorrie employs 3,000 people at 12 offices, and reported 2019 revenues of $3.8 billion