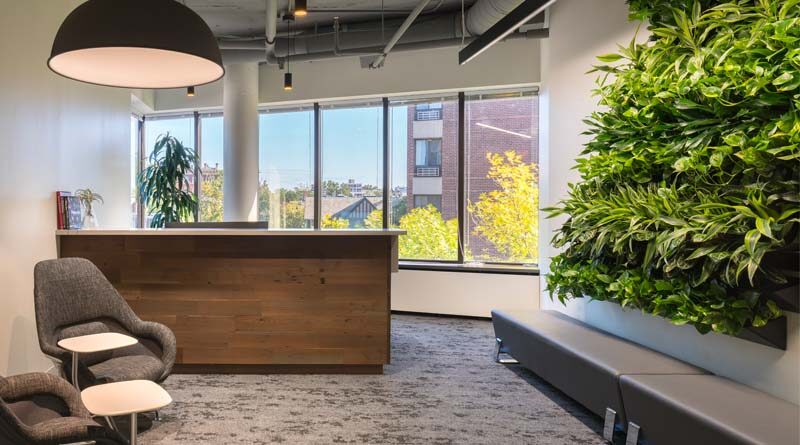 CAMBRDIGE, Mass.—Infinity Pharmaceuticals, a clinical-stage cancer therapeutics company based in the college-heavy town of Cambridge, hired the Boston architectural designer Dyer Brown to design its new headquarters facility, applying what is being described as a “forest-inspired” motif.

The 10,000-square-foot administration head office was imagined to be less “brutish” and more in tune with natural elements, specifically the forests that once blanketed the land that is now Massachusetts. Furthermore, the design was meant to provide a positive, stimulating environment for Infinity’s employees, who are known for being avid fans of the outdoors.

Furthermore, as COVID-19 has emptied out offices around the country, forcing many into remote work while others suffer sudden unemployment, the wisdom of maintaining so-called “open-plan” office spaces has been called into question. Dyer Brown’s design, while incorporating communal areas such as kitchens, nonetheless keeps infection control in mind. Accordingly, the design is based around what the design firm calls “microclimates” that each have their own particular light, sound and climate control, and with adequate distancing between workspaces.

Dyer Brown’s layout ensures that each employee will have access to “quiet zones” as well as nature-inspired spaces that are set across from one another along the “triangular-shaped floor of a 1970s, Brutalist-style building.” White noise systems and acoustic ceiling panels were also included in the “biophilic” design so as to minimize the possibility of sonic distractions throughout the workday.

The design firm says that its layout will promote “physical and mental wellbeing in multiple ways,” such as including a “welcoming room” for mothers and showering facilities for employees who opt to bike, walk or jog to the offices. Also, when greater office interaction becomes safer again as the pandemic hopefully subsides, Dyer Brown’s plan incorporates kitchen and pantry space designed to encourage interaction among workers.

Dyer Brown’s team applied ceilings of varying heights, such that it gave the feeling of being beneath a tree canopy, which was complemented by wood flooring and wall paneling, and a “living green wall” in the building’s lobby.

In a statement provided to HCO News, Meghann Van Dorn, senior interior designer with Dyer Brown, said that it was her firm’s assignment to create a building that would jibe with Infinity’s mission to focus on what she called “sustainable innovation” in its ongoing quest to develop new medicines.

“With that in mind, the company’s leaders wanted a warm and inviting atmosphere that wouldn’t be too ‘techy,’” Van Dorn said. “Dyer Brown’s design team responded by taking a cue from the colors of the Infinity Pharmaceuticals logo, green and blue, and softening those colors to fit a nature-inspired palette. This is complimented in several areas by the inclusion of natural wood finishes, emphasis on the exterior views, live plantings, and a carpeting pattern that evokes the moss that grows naturally on a wooded path.”

The general contractor for the Infinity Pharmaceuticals HQ was J. Calnan & Associates of nearby Quincy, Massachusetts.