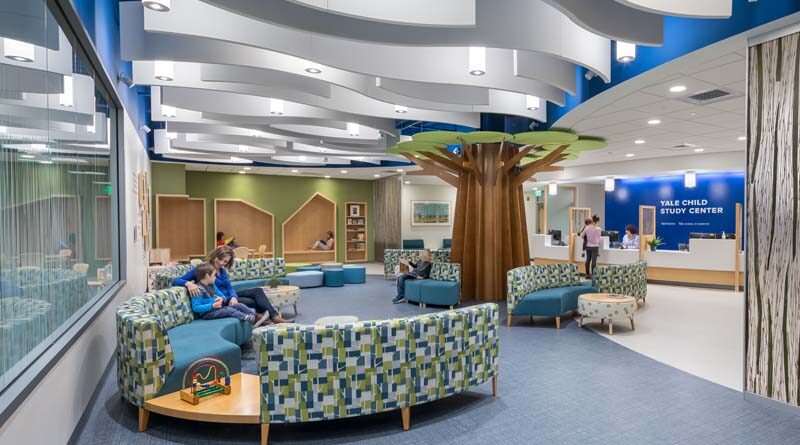 NEW HAVEN, Conn.—Architecture and design firm Svigals + Partners, based in the same city as Yale University, recently announced the completion of a new facility for the Yale Child Study Center (YCSC) that has effectively brought all of the center’s operations and staff together under one roof for the first time since the center first started working with families in 1911—when it operated as the Department of Child Psychiatry for both Yale-New Haven Hospital and Yale School of Medicine.

The 55,000-square-foot facility, located at 350 George Street, offers outpatient services on its first floor, with the second floor devoted to family support and patient care, and the third floor home to research and administrative offices. In redesigning the new facility, officials at Svigals + Partners wished to apply the firm’s approach of fostering comfortable environments for patients and their families. This included applying a nature theme as well as expanding windows such that a greater amount of sunlight enters into the healthcare facility.

Svigals + Partners had its work cut out for it in that the original building was designed to be utilized as a telephone company. So in its redesign to make the building suitable for healthcare usage by the YCSC—as well as expand natural sunlight—miles of telephone cables within the building had to be removed and also the ceiling raised. But the repurposing also gave the designers an opportunity not only to update the old building but to redesign it to better suit its new mission.

Accordingly, a structural column in the main waiting area was repurposed as a stylized “tree” made of laminate and veneer. The color scheme in the waiting room features a white-and-blue motif on the ceiling meant to evoke a skyscape, which further makes the environment feel welcoming and calming for patients and their families. This color scheme is joined by an overhead sculpture of a school of fish hanging above the lobby’s main staircase, which was fashioned by Nancy Samotis of Art for Healing Environments, LLC.

“Our strategy was to make the building more human-centered,” Lynn Brotman, associate principal with Svigals + Partners and the lead designer on the project, stated recently. “Not only is the space user-friendly for patients and their families, it’s a supportive research and work environment that fosters collaboration.”

The nature motif is extended to the building’s hallways, with examination rooms given friendly-sounding names such as “Forest A-227.”

“We allowed the existing architecture of 350 George to inform the programming and design solutions by locating the second floor waiting room and ‘main street’ corridor in the spaces where the ceiling could be raised, and placing circulation in areas where the new window openings introduce natural daylight,” Brotman said. “Adapting 350 George has produced a single facility to serve as a home for both treatment and study. Not only is this more user-friendly for patients and their families, it creates a supportive research and work environment that fosters collaboration and cross-pollination of ideas.”