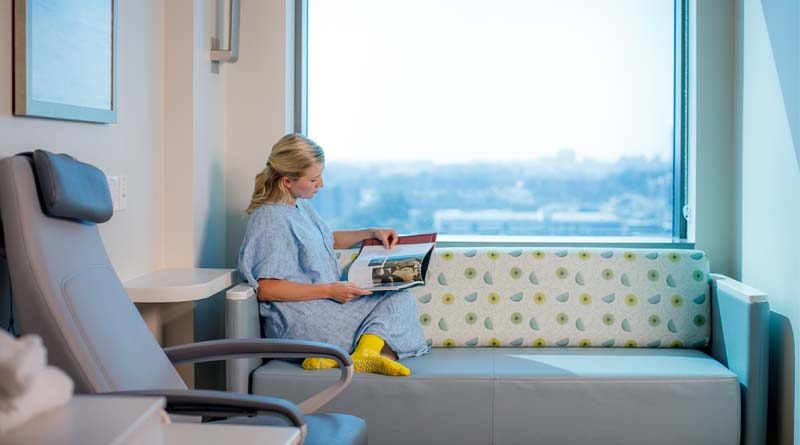 Technology is transforming every aspect of the healthcare industry at a rapid pace. While we often think of change in terms of digital tools, innovation in the physical environment where healthcare takes place also has the potential to contribute to healthier outcomes for patients.

Study after study has shown that daylight and views have a positive impact on patients’ physical and psychological well-being. Patients exposed to natural light require up to 50 percent less pain medication and can decrease heart rate and lower blood pressure. Full spectrum daylight has been shown to work faster than wellbutrin. And, a recent study found that patients whose beds were closer to a window spent less time in the hospital.

Exposure to natural light throughout the day is critical for the health and well-being of not only patients, but hospital staff. Hospitals have to ensure all of their windows are safe and made out of a material that is strong and able to block out noise. Many offices and similar buildings to hospitals use aluminum-clad windows and similar strong materials for their windows in order to protect their patients. As more healthcare processes are digitized, hospital staff are more prone to workplace fatigue from excessive glare on computer screens that can be mitigated with light. A recent case study by Alan Hedge, a professor in the Department of Design and Environmental Analysis at Cornell University, showed that natural light can reduce eye strain by 51 percent, headaches by 63 percent and drowsiness by 56 percent-dramatically improving worker health and productivity.

Despite a consensus throughout the medical community confirming the importance of natural light, people don’t get nearly enough. People spend 90 percent of their time indoors, where their lives are lit by humming screens and artificial bulbs. The limited amount of natural light most people do get shines through traditional windows, which do little to manage heat and glare throughout the day. Light-depleted patients and medical practitioners can only endure a few minutes of the day near them before they start to get uncomfortable.

Companies such as View have spent years developing an innovative solution to this problem. View’s smart windows are made from glass that intelligently changes its tint based on cloud cover and the angle of the sun, maximizing healthy daylight throughout the day while reducing uncomfortable heat and glare.

There’s evidence that this pays off beyond a healthcare setting. In a study of the effects of smart window technology on workplace wellness, a team of researchers looked at employees who had moved from an office with regular windows and blinds to one in the same building with smart windows. Their benefits were even greater than previous nationwide studies. In the new office, employees reported a reduction in vision-related health problems, including a 78 percent reduction in eye strain, 80 percent reduction in headaches and a complete elimination of drowsiness.

At the end of this workplace wellness study, employees working in the office with smart windows also reported a significant increase in positive emotions-they were happier, calmer, and more comfortable-and a decrease in negative emotions. Remarkably, this pattern held throughout the year. These results demonstrated that smart windows can help create a healthy human environment during both the intense heat and glare of summer months and the colder, shorter days of winter.

The study’s results could prove particularly helpful for workers in the healthcare industry. The hospital work environment can be stressful. Nurses and physicians are required to perform complex tasks-such as filling prescriptions, administering medication, and performing critical operations-often with little sleep. In such a demanding environment, the right kind of light can help reduce stress and mistakes.

Some modern healthcare facilities have taken note and designed with environmental health as a focus. In 2013, Methodist Le Bonheur, a not-for-profit healthcare system, decided to build a hospital in Olive Branch, Mississippi, one of the fastest growing cities in the country. As part of the hospital’s vision to build an innovative, environmental-friendly facility, architects chose to install more than 2,000 square feet of smart windows in the glass atrium that spans the full five stories of the hospital’s southwest side. “I think natural light creates a warmer environment for our physicians to work in and to interact with their patients,” said David Baytos, the CEO of Methodist Le Bonheur.

Marcia Crooks, a receptionist at Methodist’s Olive Branch hospital, said the smart windows have had a positive impact on patients. “When they come in, some of them are experiencing some pain,” she said. “With the smart glass, they’re able to relax a little more. They’re comforted.”

Based on the very positive results of the Olive Branch Hospital, they have installed View’s smart window in their new expansion in Memphis. And Methodist is not alone; View has also been installed in the University of Vermont Medical Center in Burlington, Humber River Hospital in Toronto, and Kaiser Permanente’s medical offices in Victorville, Calif.

Smart windows not only create buildings that are healthier for their occupants, but the environment. More than any other design element in the sustainable building envelope today, smart windows have been shown to improve energy efficiency by up to 20 percent. Methodist le Bonheur was able to save immediately by reducing its heating and cooling system and saves additional money each year in reduced energy costs.

Much like it would be ill-advised to build a new healthcare project without the latest digital health tools, it would be irresponsible to not consider smart windows for a healthcare facility or any other new project with holistic health and environmental benefits as a goal.