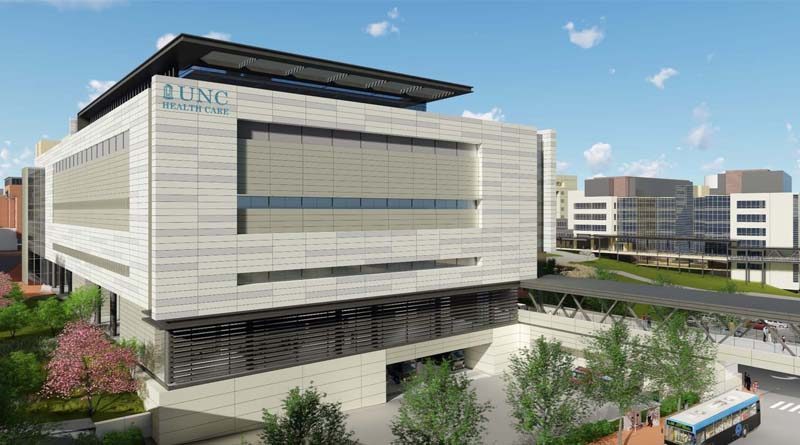 CHAPEL HILL, N.C.—Health Care constructor Skanska has been tapped to build the University of North Carolina’s Surgical Tower, which will be located at the college’s UNC Health Care campus in Chapel Hill.

The seven-story tower will include a basement level and also house 24 operating rooms and two hybrid operating rooms. The facility will also host new reception and visitor waiting areas, offices and conference rooms and staff lounge.

The project, valued at $257 million, entails 335,000 square feet of healthcare space. Skanska is providing preconstruction and construction management services over the work’s three stages. Phase one work includes site development and the buildout of a new connector basement, as well as utility relocations and upgrades to the storm and sewage systems. This will be followed by deep foundation work in phase two and phase three’s focus on the surgical tower.

“This project lives up to Skanska’s purpose, ‘Building for a Better Society,’” Greg Peele, executive vice president responsible for Skanska’s North Carolina and Virginia building operations, said in a statement. “It will provide UNC Health Care with a state-of-the-art facility to better serve its patients, their families and the health professionals who work there.”

Skanska’s work at the UNC Health Care site also includes setting up patient drop-off canopies at the existing Children’s Hospital and the to-be-constructed Surgical Tower. Two overhead pedestrian bridges will link the dental school and existing parking decks to the new Surgical Tower. Furthermore, the new facility will include a three-story service connector and expansion to the existing hospital café. Renovations will also be undertaken at the existing Ambulatory Patient Care Facility.

UNC Health Care is owned by the state of North Carolina and based in Chapel Hill—part of the so-called “Research Triangle” that also includes Raleigh and Durham.

“The mission of UNC Health Care is to promote the health and well-being of the people of North Carolina,” Janet Hadar, president of UNC Medical Center, said in a statement. “The new Surgical Tower will enhance our ability to provide the highest-quality surgical and medical care for the people of our state.”

The full construction of the University of North Carolina Surgical Tower is due to be completed in August 2022, at which time it will be the largest building on the UNC Hospitals Chapel Hill campus.

In addition to its work in the healthcare sector, Skanska, based in New York and with offices in 31 metro areas throughout the country, also has a portfolio in education, sports, data centers, government and aviation. The firm’s parent company, Skanska AB—headquartered in Stockholm—announced global revenues for 2016 of $17.7 billion.