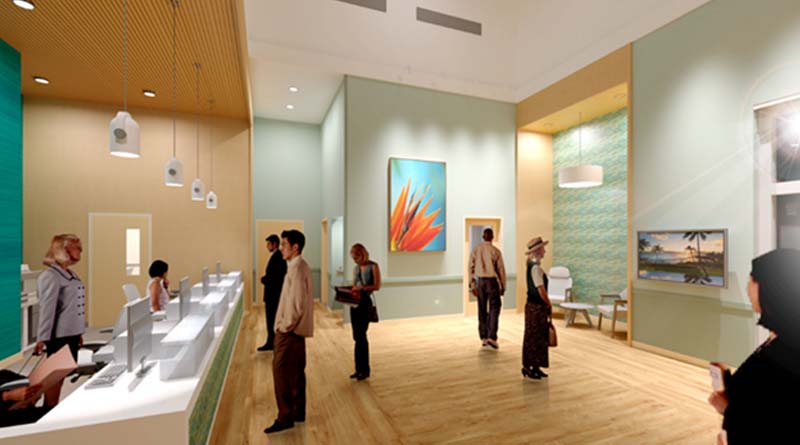 The Straub Medical Center will focus primarily on outpatient work and include 8,000 square feet of clinical space. Photo Credit: Stantec

HONOLULU—The Kahala community of Honolulu will soon have a host of new healthcare options for its residents when the Straub Medical Center health clinic and urgent care at Kūʻono Marketplace opens early next year at the site of the former Island Urgent Care Kahala center.  Kamehameha Schools is leading development of the new healthcare facility in conjunction with the architecture and engineering firm Stantec.

The Straub Medical Center, which will focus primarily on outpatient work, will entail 8,000 square feet of clinical space that will be affiliated with the Hawaii Pacific Health system.  The new facility will feature 20 examination rooms, X-ray facilities, surgical procedure space as well as room for laboratory work thanks to the firm Clinical Laboratories of Hawaii.

“It is thrilling to work with Straub and Hawaii Pacific Health on this important healthcare project for the Kahala community,” Christie Fong, Stantec project manager, said in a statement.  “Developing a new facility that will provide critical use for the local residents is truly about designing with community in mind.”

Stantec says the company prides itself on its community-oriented development projects.  Their design aesthetic, according to the firm, focuses on creating healthcare projects that seamlessly integrate within the community, fostering “spaces that are safe, open, and inviting.”

Stantec’s project work at the Straub Medical Center will center on improving the patient experience via a lobby and waiting area that is more open and light-filled.  Staff and wayfinding applications will be incorporated to help patients and their families find their way around the facility.

Last year, Kahala’s Island Urgent Care Kahala center closed after over a decade in operator, according to KHON2, after its rent reportedly was raised over 300 percent.  The center was utilized by the community for emergency and other medical services and offered walk-in appointments as well.

Kamehameha Schools soon set about to redevelop the former site of Island Urgent Care Kahala and thereafter renamed it Kahala Marketplace, KHON2 reported, with the eventually named Straub clinic becoming an anchor tenant of the redevelopment.  At the time of the Island Urgent Care Kahala clinic’s closure, there was an outcry from the Kahala community about access to healthcare close by, according to KHON2.  The Staub Medical Center may in fact help to fill in that gap.

Just this month Hawaii Pacific Health also announced new or renovated Straub clinics in Mililani and Kapolei, as well as a major expansion to the company’s facility on the island of Kauai, according to Pacific Business News.

Stantec, which has offices around the world, has operated in the Aloha State for over a decade.  The company’s new Kahala clinic and urgent care center at the Kūʻono Marketplace is expected to be ready to accept patients sometime in 2020.