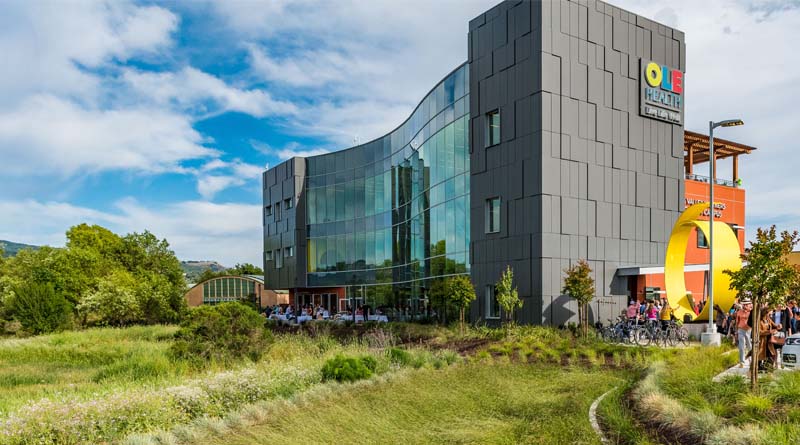 NAPA, Calif. — Amid some of the most fruitful winemaking country on the planet this week opened the OLE Health Napa Valley Vintners South Napa Campus, located in the South Napa Century Center.  The campus, valued at $32 million, will offer facilities for 37,000 patients, of which some 8,000 will be children.

The company held a ribbon-cutting ceremony Wednesday, at 300 Hartle Court in the city of Napa, with wine and small bites donated by local businesses for the occasion.

The South Napa Campus broke ground in 2017 after a fundraising campaign as well as donations of cash and land from Louis and Evalyn Trinchero and Trinchero Family Estates, as well as the Peter A. & Vernice H. Gasser Foundation.

OLE Health CEO Alicia Hardy said in a statement that the new facility is purposefully designed for patients, “to give them the best possible healthcare experience we can offer. … This beautiful new facility supports our unique model of team-based care, in which the team works closely together to deliver services in a way that is integrated, patient-centered and seamless.”

The design of the facility is such that patient treatment plans can be managed effectively across all health departments.

According to OLE Health, the company, founded in 1972, provides care to about one in six adults in Napa County and thousands of agricultural workers in the wine and other nearby growing trades.  The new building is called the Napa Valley Vintners South Napa Campus in honor of the Napa Valley Vintners’ $6 million donation to the overall $32 million price tag of the project.

“Since our first small grant in 1984, we have worked closely with OLE Health investing a total of over $40 million in funds raised at Auction Napa Valley with them as our largest nonprofit partner,” said David Pearson, who chairs the NVV Board of Directors.  “We are honored to support an organization that delivers efficient, high-quality and compassionate care to so many, including uninsured and underinsured clients.”

OLE Health says they expect to begin admitting patients at the South Napa Campus on June 3.