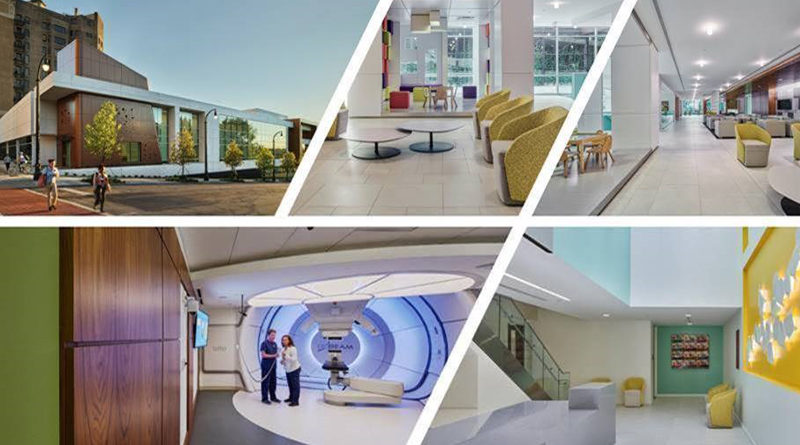 ATLANTA — Stantec recently announced the debut of the Emory Proton Therapy Center — the first treatment facility of its kind to open in Georgia that provides advanced cancer care to patients in the region.

The state-of-the-art center features a 90-ton cyclotron that generates proton particles and four, 240-ton gantries that rotate 360 degrees around the patient to precisely aim the proton beam at a tumor.

The treatment center includes five treatment rooms with the ability to provide proton beam therapy to up to 1,700 patients, including children, annually.

The building’s design takes inspiration from the local cityscape while also ensuring a peaceful retreat for patients; with design features including a generous courtyard lined with a vertical garden as well as a palette that fuses natural colors and textures with its wooden panels.

Furthermore, dashes of bright color reinforce an uplifting atmosphere while providing wayfinding for patients and staff.

The designers also emphasized the significance of considering the comfort of its pediatric population by including family-friendly elements such as a designated family waiting room in the main lobby, a unique playhouse and a layout that allows parents to accompany children through treatment.

The sand and charcoal exterior is also punctuated by generous expanses of glass to help to reinforce the building’s integration with the cityscape.

Standing as a project seven years in the making, the newly completed facility aims to strengthen city of Atlanta’s position as a center for biomedical innovation and advanced cancer care.

“As a facility treating patients of all ages, our team paid particular attention to the comfort of the pediatric population in the design of the Emory Proton Center,” said Paula Williams, a principal at Stantec. “The design includes a dedicated family waiting room in the main lobby, along with a unique playhouse to help these young patients find some comfort. The center’s layout has also been carefully considered to allow parents to accompany children through the clinical and treatment journey.”

According to Emory University, proton therapy is a painless and non-invasive form of external beam radiation that can be used in the successful treatment of patients with a variety of types of cancer and benign tumors.

With this new center, Winship Cancer Institute of Emory University adds a powerful radiation therapy option to its broad array of cancer-fighting tools. The center will help strengthen Winship’s emergence as a national leader in cancer research and care.

“We are thrilled to begin offering proton therapy treatment to patients in the state of Georgia,” said Winship Cancer Institute Executive Director Walter J. Curran, Jr., MD. “The new center will provide an array of new therapeutic opportunities for our patients close to their home.”

The Emory Proton Center officially opened its doors on Dec. 6, 2018 in Midtown Atlanta with a VIP ribbon-cutting ceremony.