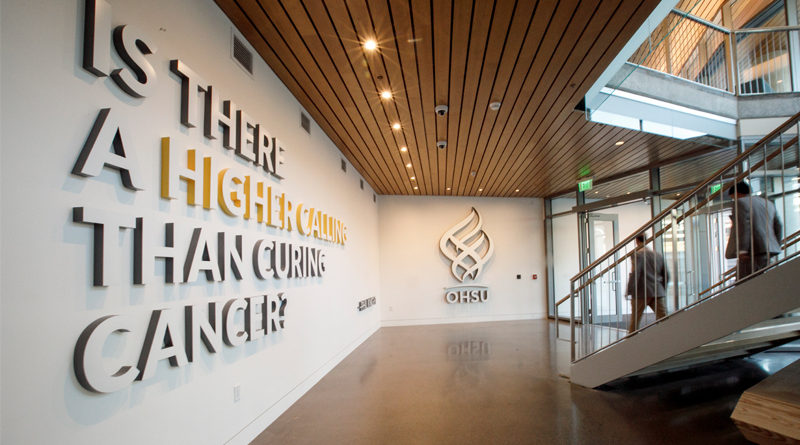 The McCarthy and Andersen Construction partnership (McCarthy/Andersen), along with SRG Partnership, Inc. and Oregon Health & Science University (OHSU) began construction in June 2016 and completed the project in August 2018.

The new building will facilitate up to 650 researchers and will serve as the center for the Knight Cancer Institute.

KRCB’s new 320,000-square-foot building’s design works to maintain two similar activities—collaborative work and casual social interaction along with bringing together some of the world’s leading researchers.

The building encourages casual social interactions through various meeting attractions including cafés, a pub and an outdoor deck while a range of meeting spaces — small private rooms for individual work, casual spaces for conversation and more formal conference rooms—support different modes of work and connection.

The design trades the stereotypical dark, basement-like workspaces seen in many lab/research facilities for a softer, warmer space through the incorporation of glass and wood elements which helps to widen the space and provide access to natural light.

Outside views can be accessed from essentially any work station, offering an inviting and comfortable space for researchers in the facility.

“From a structural standpoint, the auditorium serves as a true engineering marvel,” said Richard Brecke, LEED AP, project director at McCarthy/Andersen. “Clear views of the entire room were deemed necessary for the functionality of the space and how it would be used. To ensure clear lines of sight, the team realized that removal of a major support column in the center of the auditorium needed to be accomplished without interfering with the building’s structural integrity.”

Brecke continued, explaining that with considerable latitude to identify optimal, value-driven solutions, the structural team designed and constructed the unique and innovative sixth-floor concrete transfer girder and hanging column, which goes down to the roof of the auditorium and holds up the floors above.

According to Brecke, the team achieved building completion by working with many local subcontractors, including Andersen Structures, Cherry City Electric, TCM, J.H. Kelly, Western States Fire Protection, Fred Shearer and Son, McDonald Excavating, General Sheet Metal, and Raimore Construction, a local minority-owned business that was responsible for managing the fabrication and erection of the steel.

“The project team took on an innovative approach to deliver KCRB through Integrated Project Delivery,” said Brecke. While using a ‘team build’ model, the multidisciplinary group made up of builders, architects, engineers and consultants worked together to maintain alignment on the project’s goals and guiding principles through all project phases in support of creating the “team science” facility.”

Brecke continued, stating that the cohesive environment emphasized by an on-site co-location facility, combined with tools including virtual reality and the use of lean construction methodology were instrumental in allowing McCarthy/Andersen to reach its full potential as an integrated design and construction team.

The building’s generator is also one KRCB’s most noteworthy technological features.

It’s sized to service the facility for 48 hours, and in the event of an emergency, the power company is given the ability to turn the generator on and redirect power back into the grid to provide the immediate community with power.

KCRB also touts a 10-gigabit network – significantly larger than the one gigabit network seen with most buildings – to aid the computational biology research that will take place. The incorporation of such a large network specifically grants computational biologists with added flexibility so they can collaborate with other teams and move about the building without issue.

Ultimately, it is the Knight Cancer Institute’s mission to use these advanced research facilities to put an end to cancer one and for all.

“We pledge to use this facility to end cancer as we know it,” Brian Druker, director of the OHSU Knight Cancer Institute said in a press release. “We will be reminded of our pledge each day as we work within these walls.”