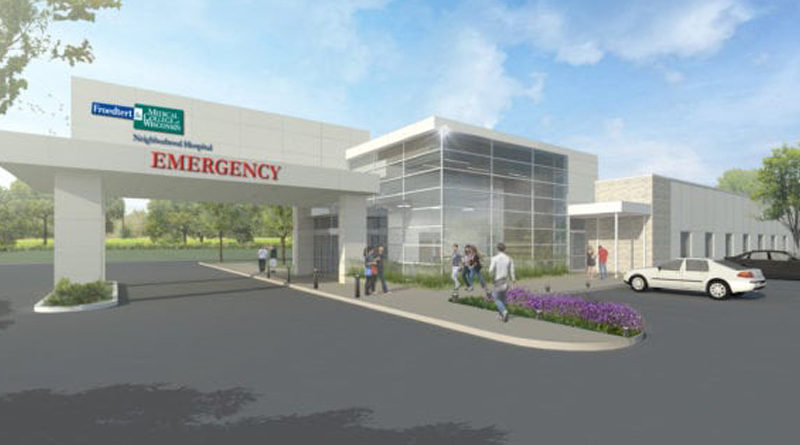 MILWAUKEE — Froedtert & the Medical College of Wisconsin announced plans to build a new, small-scale community hospital near its Drexel Town Square Health Center in Oak Creek as the health network seeks to alleviate capacity limitations at its leading Wauwatosa hospital and expand its presence south of Milwaukee.

According to the hospital’s website, Froedtert Hospital’s occupancy is one of the highest in the state, often exceeding 85 percent with its emergency department being among the region’s busiest.

As a response from the health network – the new hospital, known as the “neighborhood hospital,” will offer eased access and efficiency to its emergency and inpatient care while being in close proximity to where people both work and live.

The new 18,000-square-foot hospital will include a 24/7 seven-bed emergency department and eight inpatient beds for patients requiring additional care, observation and tests.

The neighborhood hospital will also employ Medical College of Wisconsin emergency physicians as well as experienced registered nurses which is projected to see about 15 to 25 patients per day and will employ about 40 full-and part-time staff.

“We see the neighborhood hospital as a way to keep high-quality care close to home in a convenient setting that is easy to navigate,” said Cathy Jacobson, president and chief executive officer of Froedtert Health in a press release. “It also will fill a need for this level of care in Oak Creek, which currently does not have a hospital.”

Jacobson continued, explaining that Froedtert hospital treats numerous patients from the Oak Creek area, which currently does not have a hospital, serving approximately 80 people per day who have traveled from Oak Creek over the last five years.

“It makes sense to provide emergency and inpatient services in their community,” said Jacobson.

The hospital is projected to cost about $10 million and although it will not be able to provide surgical services, it will be an option for some patients who require an overnight stay, such as those who are dehydrated or who have pneumonia, according to the Journal Sentinel.

Froedtert has joined Tandem Hospital Partners to create this micro hospital, a Houston, Texas-based firm that runs several other neighborhood hospitals across the country.

The health network presented the concept in May when plans were announced for a similar project in Mequon. The Mequon neighborhood hospital is also scheduled to open in early 2020.

The Froedtert & MCW health network includes five hospitals with more than 1,600 physicians and nearly 40 health centers and clinics, drawing patients from throughout the Midwest and the nation. In their most recent fiscal year, outpatient visits exceeded 1.1 million, inpatient admissions to their hospitals were 49,250 and visits to our network physicians totaled 932,000.

Froedtert Hospital hosts 585-beds and is nationally recognized for their physicians and nurses, research leadership, and state-of-the-art treatments and technology. It serves as an eastern Wisconsin referral center for advanced medical care in 37 specialties and is a major training facility with more than 1,000 medical, nursing and health technical students in training.

Reports from the Journal Sentinel and Froedtert & Medical College of Wisconsin contributed to this story.