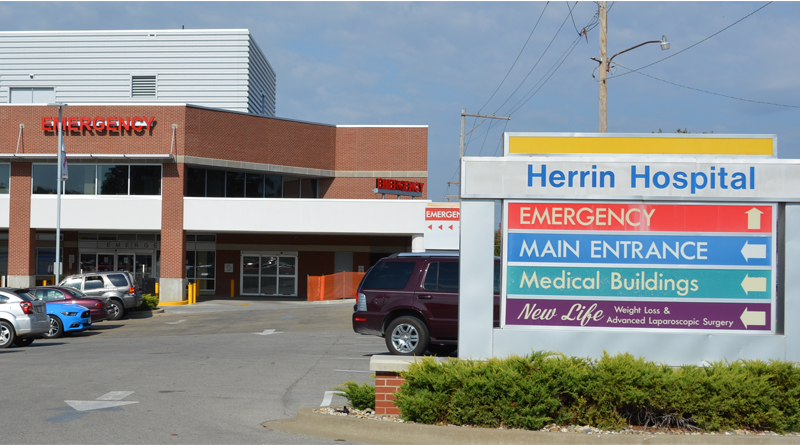 HERRIN, Ill. — On most construction jobs, time is measured in months, not minutes. But the expansion and renovation of Herrin Hospital in Herrin, scheduled for completion later this year, is not a typical construction job.

The $23.6 million project involved the addition of a second-floor surgery center expansion directly above an active Emergency Department (ED) and the primary entrance where patients and emergency vehicles access the facility every day.

Several times a month, Life Flight helicopters had to safely transport critically ill patients to the two-story structure’s rooftop helipad — just 15 feet from the construction site. The construction team had a matter of minutes to mobilize and prepare for these urgent, yet impossible-to-predict, scenarios.

Our team worked closely with the hospital operations group to develop a systematic process to ensure the site was prepared in advance to accommodate the safe, efficient arrival of a helicopter. The plan included a priority call list and protocol to ensure the crew took quick, decisive action.

Fifteen minutes before a helicopter was expected to arrive, the team received a call and instructed everyone in the area to evacuate. If there were any cranes up, we had to boom down. All of the work was planned ahead of time and set up to make everything happen within a 15-minute period.

And after the helicopter departed from the helipad, the team received another call to confirm that construction activity could resume. Thanks to the coordinated execution of this plan, there were no negative impacts on the construction schedule.

Part of the Southern Illinois Healthcare system, Herrin Hospital was originally constructed in 1914 and has undergone multiple expansions to accommodate growing patient demand throughout the southern Illinois region. A 21,369-square-foot vertical expansion was the only viable option for expanding the surgery center on this landlocked campus, which is surrounded on all sides by streets and other property owners.

Though vertical expansions are becoming increasingly more common in acute care facilities, construction teams often lack the specialized expertise to effectively build a project while managing its inherent risks and challenges. During my 16-year career at McCarthy, I’ve overseen numerous vertical expansions, subterranean additions, specialized medical equipment upgrades and other highly phased renovation projects. Each project has unique challenges and there’s something new to learn on every one of them.

On the Herrin project, our staff and subcontractors received extensive ongoing training to equip them to manage the unique aspects of vertical expansions and working on an active hospital. Our goal was to efficiently build the project while maintaining operations and not negatively impacting patient satisfaction.

Because the ED was part of an active construction site, the team remained vigilant about issues such as infection control, limiting noise and vibration, controlling odors from construction and maintaining emergency traffic flow. Safety and infection control — which really is patient safety — are our No. 1 priorities. That means keeping 100 percent of construction dust outside of the facility and not increasing risks inside the hospital, all the while we’re jackhammering, core drilling and completing other operations above, beside and inside the facility.

Clear, prominent signage was posted throughout the area to inform patients and visitors what’s happening and guide them in safely navigating the site.

Beyond the inherent challenges of constructing an addition over an active ED, the project also involved the replacement of the emergency department’s entire HVAC system. We were in every square inch of the space — rerouting, removing and replacing the HVAC system and removing the air handler on the existing roof.

Additionally, the project required the relocation of above-ground, high-voltage power lines located about 8 feet east of the construction site. And the north side of the addition has limited access because of an adjacent owner’s property line. The tight site meant limited laydown space, storage space and parking space. Our team convened weekly meetings with the hospital’s facilities and clinical operations team to keep everyone informed and to ensure that all construction work was coordinated with planned hospital operations.

Phase II of the project includes renovations to the hospital’s existing operating rooms, and Phase II involves the renovation of existing waiting and support areas to create a same-day surgery center. The entire project is expected to be completed at the end of 2017.

Scott Morris is a project manager at McCarthy Building Companies.