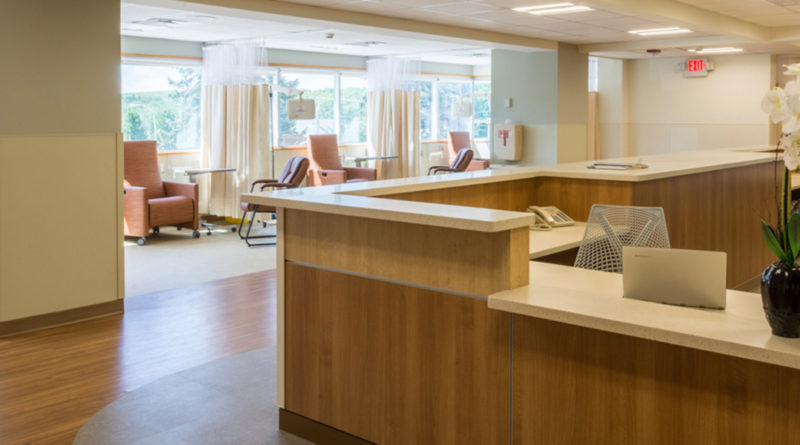 SMITHFIELD, R.I. — Construction concluded last month on the Landmark Cancer Center in Smithfield and is expected to open to the public in September. The 14,000-square-foot facility was designed by Quincy, Ma.-based JACA Architects, and construction was completed by West Greenwich, R.I.-based Ken Jones Construction. The new Landmark Cancer Center, located on the campus of the Rehabilitation Hospital of Rhode Island consists of nine patient treatment areas along with two private treatment areas, examination rooms, physician offices, a laboratory and a pharmacy.

This project marks one of the first major renovations since the Landmark Medical Center was founded in 1988. The hospital provides health care services for more than 175,000 patients on a yearly basis.

“We are excited to see the completion of this outstanding facility,” said Tony Cavallaro, president of JACA Architects, in a statement. “We are proud to contribute to the overall quality of care provided by the Landmark Cancer Center, and hope that Landmark patients will benefit greatly from the considerations designed within the center.”

To incorporate a more sustainable design, Landmark Medical center replaced an outdated exterior storefront and installed, larger, more heat reflective windows, according to a statement. A new, energy-efficient HVAC system was also installed to heat and cool the building.

Designers also incorporated large windows and used natural light to help facilitate a calmer and more healing environment, according to a statement.

In order to make patients as comfortable as possible during their stay at Landmark, designers included individual lighting controls, video controls and Wi-Fi in each room. Additional accommodations were included for families who are spending the night.

One major challenge JACA faced was developing a design that matched the floor plan of other facilities located on the Rehabilitation Hospital of Rhode Island’s campus. During the design process, architects were able to maintain the majority of the patient room layouts and plumbing features while creating the enough space for different departments in the hospital.

According to a statement from JACA, the project cost over $3 million to build and design and construction began in fall of 2015.

JACA Architects has been involved in large-scale construction projects since 1991. They specialize in designing medical and senior-living facilities as well as health care centers.