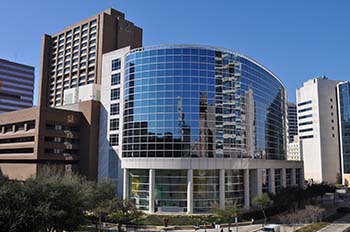 For every health care facility, patient safety is of paramount importance. In the event of a disaster (either natural or man-made), medical personnel need to feel confident that both patients and equipment are safe and that the facility is able to provide needed care.

Recently, Baylor St. Luke’s Medical Center, a 850-bed medical and surgical facility in Houston decided to seek out an innovative solution to enhance the safety and security of the facility. Given Houston’s location on the Gulf Coast, the area is considered vulnerable to powerful storms that can cost lives and billions of dollars in property damage. Like many health care facilities in this region, the St. Luke’s staff sought a long-term solution that could enhance its disaster preparedness. They were often forced to relocate and shuffle patients around — including those in intensive care floors in critical condition — when there was the threat of a disaster.

In addition to the dangers to patients posed by flying glass, the team was concerned with protecting its valuable medical equipment — if there was a disaster that shattered windows this would potentially expose the equipment to water damage and theft by intruders.

After securing a Federal Emergency Management Agency (FEMA) grant, the staff launched an initiative to secure the hospital’s vast amount of glass windows and doors. The St. Luke’s management team searched for a product to cost-effectively address the hospital’s security needs.

After exploring its options, the staff decided the ideal solution was window film. The project involved installing 65,000 square feet of film on the facility’s windows and glass doors. Once installed, the window film gave the St. Luke’s team what it was looking for: greater safety and peace of mind. Hospital staff members no longer have to plan for the contingency of moving patients around, and the medical equipment is more secure.

Window Film: Not What it Was in the ’70s

Window film is a polyester-based product, usually made of PET (Polyethylene Teraphthalate), which is the same product used to make water bottles. Most window films involve multiple layers laminated together for strength, and utilize an aggressive pressure sensitive mounting adhesive. Most films are applied to the interior surface of a glass window in a home, commercial building or car. They have a scratch resistant coating on the outer surface to protect the film.

How Window Film can Offer Protection

Window film is used in many applications, with growing popularity in architectural and commercial installations. However, for facilities like St. Luke’s, window film is increasingly being used as a safety and security measure. Those include blast mitigation and making glass more secure by helping to keep dangerous shards of glass together when impacted by storms or high winds.

Windows and doors are the most vulnerable parts of a building, and often a huge concern for facility managers. They are easy points of entry for people who may mean harm to the occupants. Glass is also an inviting target for vandals intent on mischief or worse. Safety window films offer a measure of protection by holding broken glass shards in place making entry through a glass window or door difficult for would-be vandals. Safety film also protects from the hazards of flying glass fragments.

When ordinary non-tempered glass breaks, it poses considerable danger. With filmed glass, this hazard is significantly reduced. As with any safety measure, there are limitations to what the product can do. Today’s safety films are marketed and thoroughly tested for improving glass performance regarding safety glazing, intrusion, extreme weather conditions and blast mitigation. However, although films can reduce glass hazards upon initial impact and slow the intrusion process, with repeated impacts they will eventually allow access, as do many anti-intrusion products.

In addition to enhanced safety and security, many of today’s advanced solar control window film provides the following benefits for commercial facilities.

Building managers and owners are tasked with finding cost-efficient ways to improve day-to-day operations. About 30 percent of a building’s cooling load is from windows, and about 75 percent of windows are not energy efficient. Upgrading older inefficient window systems can yield positive results by reducing strain on aging HVAC cooling systems, especially at peak heat periods.

Additionally, some window film can block up to 86 percent of the sun’s heat, helping to reduce air conditioning costs. It also retains interior heat during the winter resulting in lower heating costs. Installing solar control window film increases the amount of solar energy both reflected and absorbed by the window, thus reducing the amount entering into the space, leading to a reduction in rising energy-costs.

Ultraviolet radiation travels through windows, where it can contribute to the daily accumulation of sun exposure that can lead to skin cancer and photoaging. UV-blocking films protect patients, staff and facility’s furnishings by rejecting 99 percent or more of both UVA and UVB rays. Although natural daylighting is a desired quality in hospital design, allowing the sun to stream in through windows can expose inhabitants and fixtures to dangerous UV rays, especially employees who are working near the windows on a constant basis.

Natural daylight in hospital environments has been linked to productivity and happiness. But with that natural daylight comes a glare that’s often intensified when reflected off computer and medical equipment screens found in today’s hospital settings. Window film can significantly reduce the glare on computer and electronic screens, easing strain on the eyes for medical workers on a daily basis. The film also provides an additional layer of privacy and comfort. Window film is an ideal solution for facility managers looking for a way to keep work spaces comfortable and productive.

Jeffery R. Plummer is the senior vice president of sales and marketing for Madico Window Films based in St. Petersburg, Fla. He can be reached at jplummer@madico.com.